Working out might be easy in the summer months, but what happens in those cold, dark, December mornings when your bed is more comfortable than you ever remember it being before? 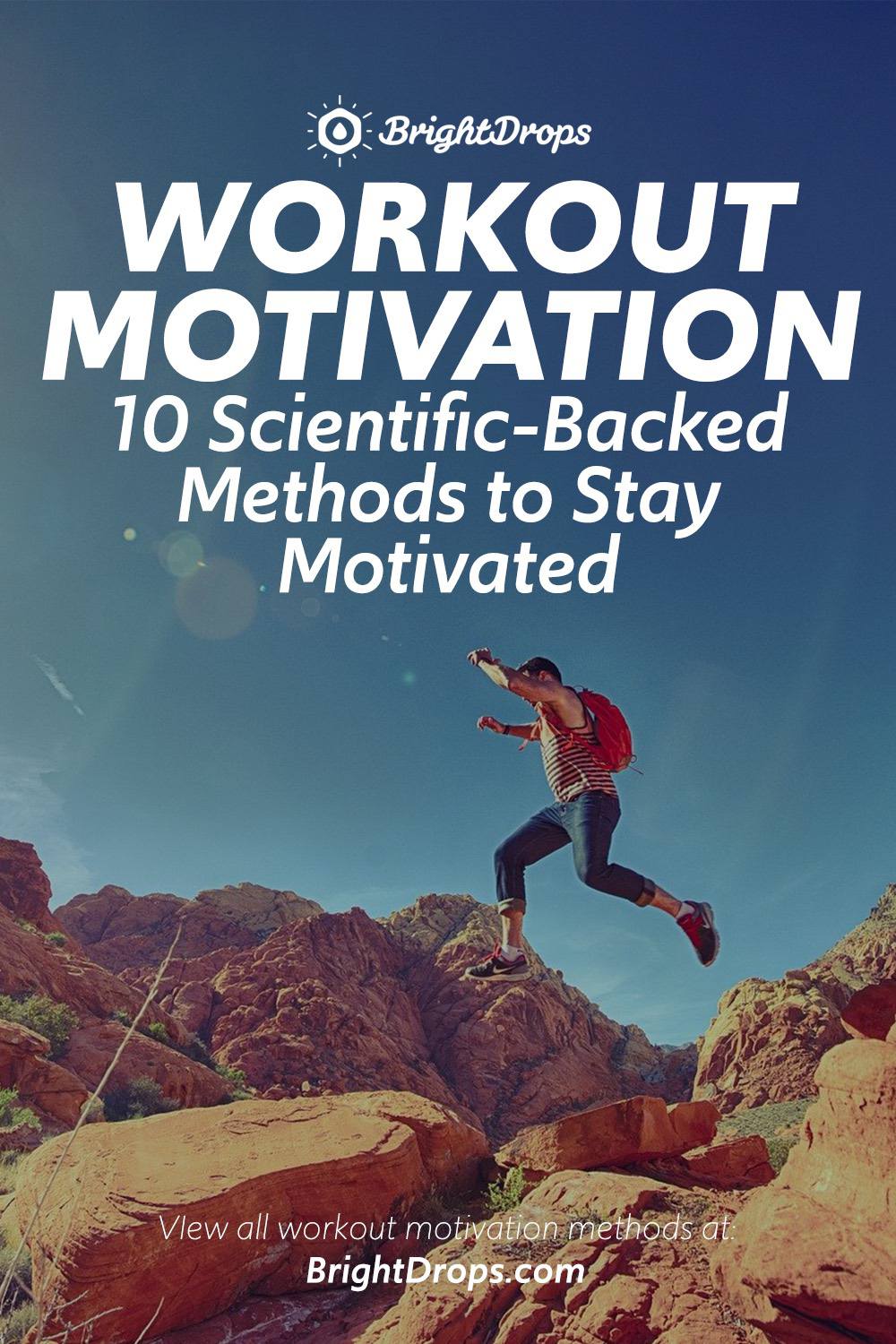 What about when you’ve had a long, grueling day at the office and all you want to do is go home and open a glass of wine? How do you find your workout motivation then?

Well, science has the answer, and we have collated 10 of the best scientific-backed methods to stay motivated for workouts, even when exercise is the last thing on your mind.

1. Pump Up the Volume

Whether you go to the gym now or you have been in one in the past, you will have noticed that the music they play is loud and fast. This isn’t just down to the gym instructor’s personal taste in music, it’s scientifically proven that fast music encourages better workout performance.

Numerous studies support this theory, including this 2006 one by Judy Edworthy & Hannah Waring which tested 30 subjects on the efficacy of tempo and volume in an exercise setting. The results confirmed that fast and loud music provided the optimum conditions for exercising.[1]

Furthermore, it’s thought that the perfect tempo for exercise is between 125 and 140 beats per minute and that this tempo allows for more endurance and less fatigue – so basically you work out harder and longer, but feel the strain less.[2]

We all know that doing anything with a friend or partner is more fun than doing it alone, but did you know that exercising with a buddy can actually motivate you to work out harder, too?

Researchers at the University of Aberdeen conducted a study[3] into whether having a companion would help or hinder time in the gym, with half the participants carrying on as normal, and the other half exercising with a new gym partner. The results showed that those who exercised alone put in less time and less effort than those who were exercising in pairs.

The study also examined whether the type of support a workout mate offered made a difference, and it was discovered that those who offered emotional support and encouragement made more of a difference than those who just provided a practical presence.

3. Get Out in Nature

If being in the gym bores you, or you lose motivation at the thought of staring at the same four walls every day, it’s well worth considering exercising outdoors, instead. Far more interesting than using a treadmill, exercising in nature means an ever-changing landscape, not to mention variations in weather and temperature, as opposed to the steady coolness of the air con.

But what other benefits does it have? Well, according to one scientific review [4], which compared the effects of outdoor exercising to those of indoor exercising, working out in nature reduced tension, anger, and depression, and increased energy levels and feelings of being revitalized. It was also reported by participants in the study that they were more inclined to repeat the exercise again.

Even walking outdoors has huge benefits, with participants showing less neural activity in the subgenual prefrontal cortex – the area of the brain linked to depression. It was also reported that those walking in nature devoted less time to thinking about their problems [5].

4. Use a Motivational Phrase Every Morning

Choose your own short pep-talk, or adopt one of these suggestions to get and keep you motivated:

(Read these: 24 Motivational Workout Quotes to Get Your Butt Moving)

Being accountable to other people can be exactly what you need for the motivation to keep turning up for your fitness class, morning run, or gym session, but not just in real life. Posting about your efforts and goals on social media can be just as effective as telling your physical circle of friends and family, too.

A study carried out by a University in Philadelphia saw a group of 217 students divided into two groups, with one being shown promotional messages regularly throughout the trial, and the other half being placed into online peer groups. While the first group showed promise at first, their enthusiasm and effort waned as the 13 week period wore on. The second group, however, was found to actually strengthen in their resolve and efforts as they posted regular updates to their fellow online ‘friends’. [7]

Join an online exercise forum, set up a dedicated Instagram account, or simply let all your FaceBook friends know what you’re up to, and your motivation will continue to grow.

6. Keep it Close to Home

Given the choice between a new state-of-the-art gym and a backstreet one which lacks luster but has all the necessary equipment, which one would you choose? Most people will opt for the one with the bells and whistles, but what you should really be looking for is convenience.

Let’s face it, it’s effort enough to just go to the gym some days, but if you have to travel across town to get to one just because it’s new, you might just run out of steam before you get there. The backstreet gym on the next block, however, will offer all the same workout benefits but will cut the travel time needed to get there, making it much more convenient.

In a Nielsen’s 2014 Global Consumer Exercise Trends Survey, almost a quarter of participants said that convenience was a key factor in their exercise motivation, and that came second only to fun. [8]

So unless the smart new gym is in your neighborhood, opt for the closest one to you and exchange class for convenience.

Eating clean and exercise go hand in hand; there’s no point pushing yourself in the gym if you are going to scarf down a McDonald’s on the way home. But the link between eating well and working out goes even deeper than that.

According to a study published in The Journal of Physical Fitness and Sports Medicine, exercise actually changes the way you digest food, and also alters your hunger cues, even making you feel fuller for longer by changing your body’s satiety response.[9]

In effect, you get a double whammy – you lose weight and tone up through exercise, plus you don’t need to eat as much in order to feel full.

There’s nothing wrong with having an ultimate goal to have biceps like The Rock, or a waist you can fit your hands around, but studies have shown that having much smaller interim goals is what will provide the greatest workout motivation.

A group of 60 participants completed a 6-week exercise program, with 15 concentrating on the process of exercise, 15 with their eye on the eventual outcome, and the remaining 30 with no goal or process in mind.[10]

The group who was concerned with the actual process of exercise fared significantly better than those in the other two groups, not only across the 6 week period but at 3 months and 6 months, too, claiming better enjoyment and greater adherence to the program.

So if you want to succeed in exercise, keep your sights set on running an extra mile the next time, or lifting an extra weight, or swimming an extra length of the pool. Those short-term goals are what will get you through.

If you associate exercise with feelings of dread and anxiety, it will be a miserable and probably short-lived experience, because we’re not wired to do things that make us unhappy, especially when we don’t have to.

Conversely, if you can link exercise with a happy thought, your motivation will sky-rocket. [11]

Studies have shown that by choosing a memory that makes you feel good and applying it to exercise, you will change your mindset and workout more often. So search your memory bank for a feel-good memory, and use that every time you exercise.

(Read these: 36 Happy Quotes to Make Your Day (And Life) Better)

The idea that willpower is finite is behind research into its effect on workout motivation. Some studies suggest that it is possible to ‘run out’ of willpower as the day goes on and that people and circumstances can drain our resources.[12]

As exercise can take a huge amount of willpower, even in the most committed, it makes sense to avoid this phenomenon by choosing early morning as your exercise time, before other influences drain your resolve to the point where there’s not enough to get you to the gym.

While rolling out of bed and into your gym gear might not sound ideal, you stand a much better chance of making it through a session than waiting until after work when office politics have stolen the best of your determination.

Give these science-backed methods for motivation a try – not all of them will work for you, but each one of them is tried and tested and backed by experts, so you know you’re in good hands as you find the one which suits you best.