What is success, how do we win and what does it actually take to truly succeed? Read this entire list of success quotes to motivate you, discover the true meaning of success and to learn why you should never be afraid to fail.

Motivational Success Quotes on How to Be Successful 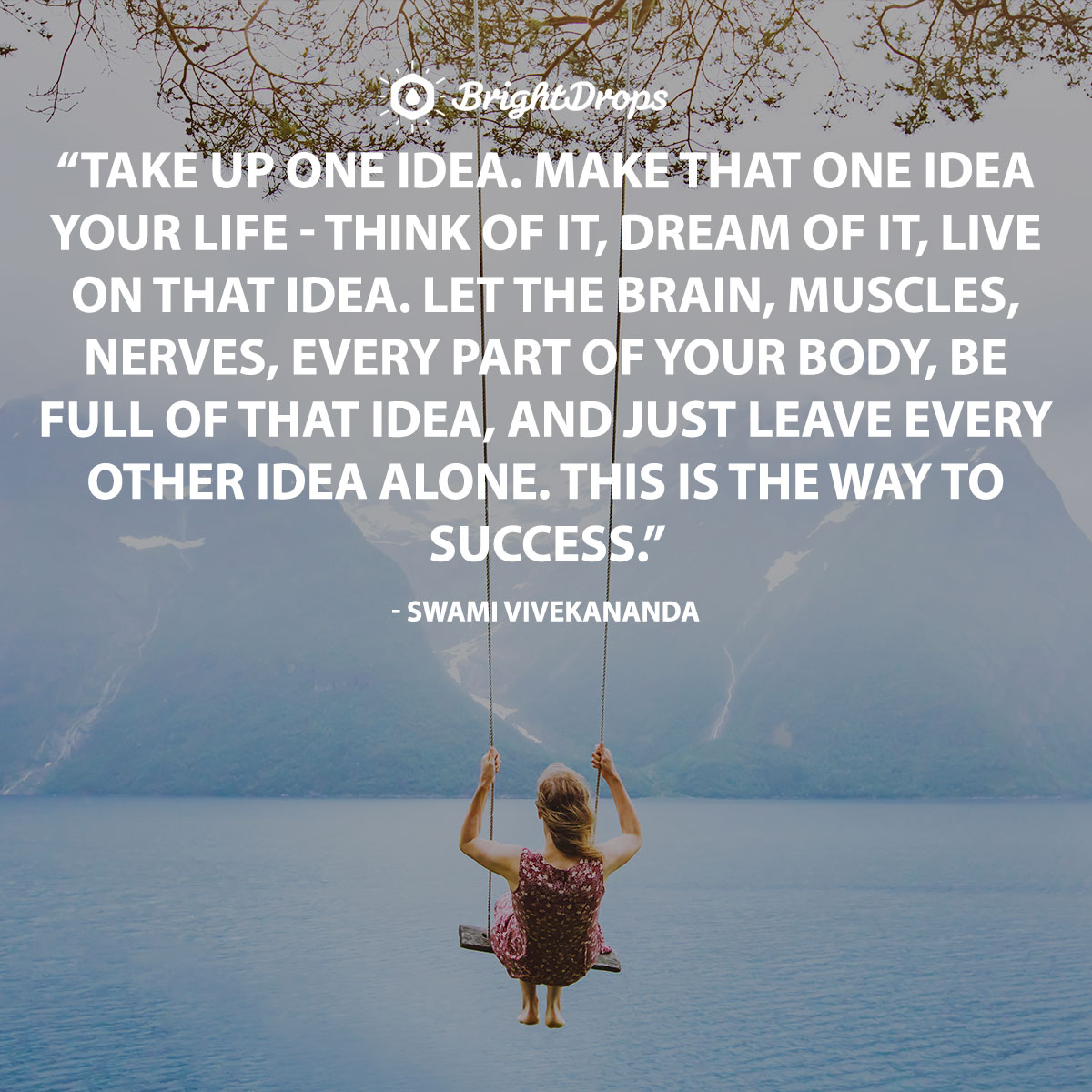 “Take up one idea. Make that one idea your life – think of it, dream of it, live on that idea. Let the brain, muscles, nerves, every part of your body, be full of that idea, and just leave every other idea alone. This is the way to success.” – Swami Vivekananda

“Success is like a lightning bolt. It’ll strike you when you least expect it, and you just have to keep the momentum going. You have to strike when the iron is hot. So for me, I just kept striking and striking to polish out the sword that I was making.” – Michelle Phan

“The most important single ingredient in the formula of success is knowing how to get along with people.” – Theodore Roosevelt

“Think twice before you speak, because your words and influence will plant the seed of either success or failure in the mind of another.” – Napoleon Hill

“In all our deeds, the proper value and respect for time determines success or failure.” – Malcolm X

“In order to succeed you must fail, so that you know what not to do the next time.” – Anthony J. D’Angelo 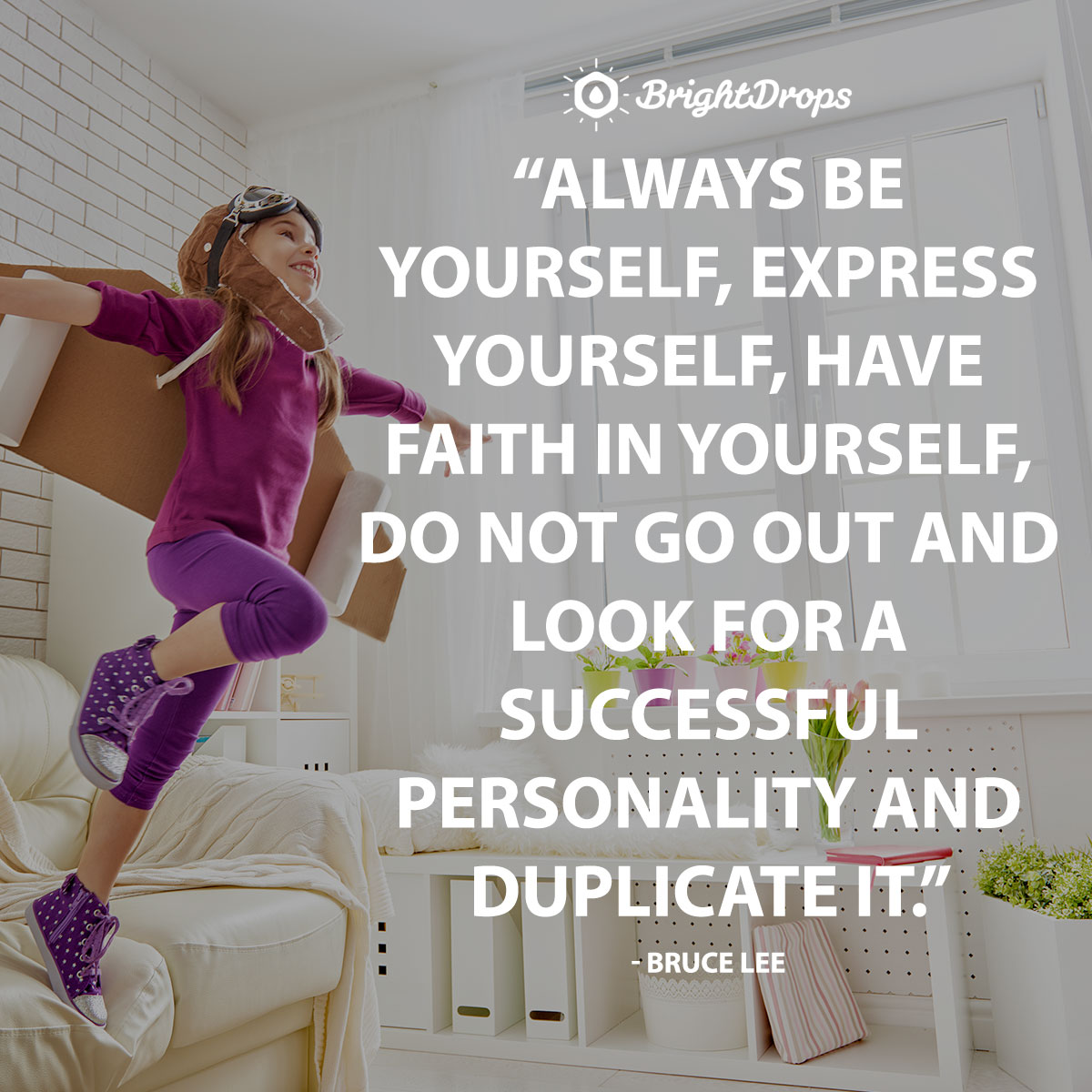 “Always be yourself, express yourself, have faith in yourself, do not go out and look for a successful personality and duplicate it.” – Bruce Lee

“The difference between a successful person and others is not a lack of strength, not a lack of knowledge, but rather a lack of will.” – Vince Lombardi

“The starting point of all achievement is desire.” – Napoleon Hill

“In order to attain the impossible, one must attempt the absurd.” – Miguel de Cervantes

“Eighty percent of success is showing up.” – Woody Allen

“Adjusting to the passage of time, I think, is a key to success and to life: just being able to roll with the punches.” – Dolly Parton

“All you need in this life is ignorance and confidence, and then success is sure.” – Mark Twain

“Action is the foundational key to all success.” – Pablo Picasso

“It had long since come to my attention that people of accomplishment rarely sat back and let things happen to them. They went out and happened to things.” – Elinor Smith

“Success depends upon previous preparation, and without such preparation there is sure to be failure.” – Confucius

“If everyone is moving forward together, then success takes care of itself.” – Henry Ford

Quotes on Why Success Isn’t Everything 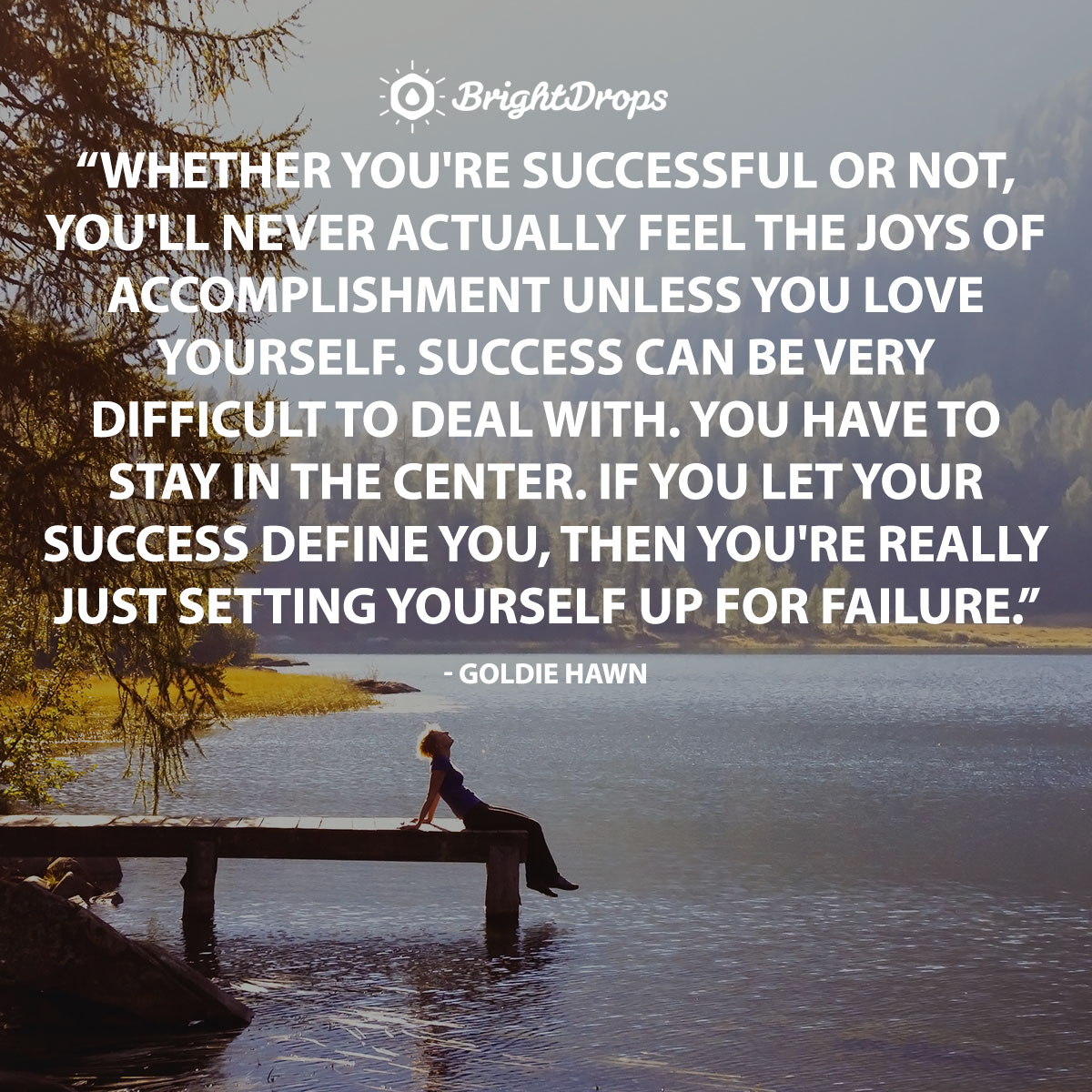 “Whether you’re successful or not, you’ll never actually feel the joys of accomplishment unless you love yourself. Success can be very difficult to deal with. You have to stay in the center. If you let your success define you, then you’re really just setting yourself up for failure.” – Goldie Hawn

“Success is a terrible thing and a wonderful thing. If you can enjoy it, it’s wonderful. If it starts eating away at you, and they’re waiting for more from me, or what can I do to top this, then you’re in trouble. Just do what you love. That’s all I want to do.” – Gene Wilder

“Strive not to be a success, but rather to be of value.” – Albert Einstein

“Success is like reaching an important birthday and finding you’re exactly the same.” – Audrey Hepburn

“Success is a lousy teacher. It seduces smart people into thinking they can’t lose.” – Bill Gates

Success Quotes on What It Really Means to Be Successful 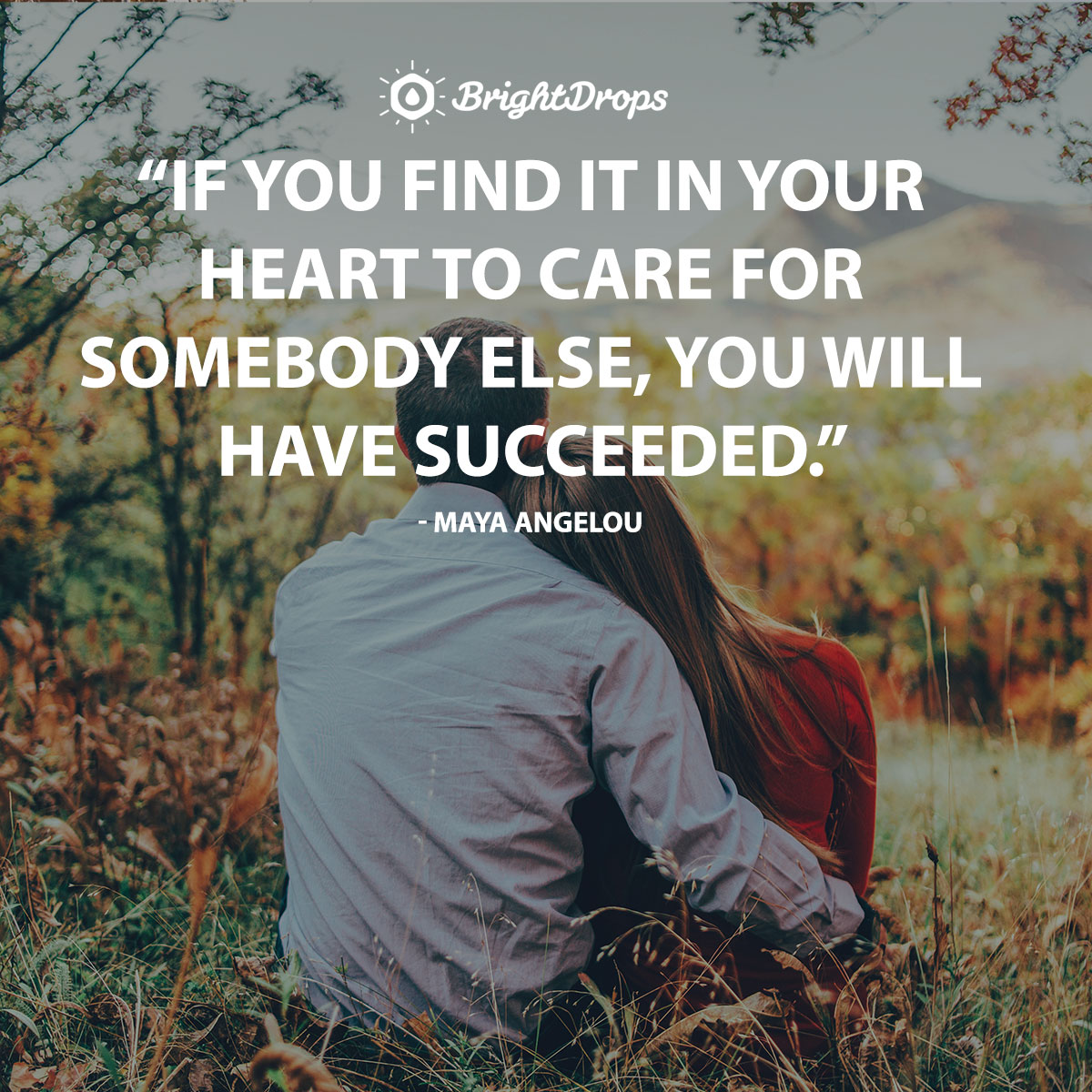 “If you find it in your heart to care for somebody else, you will have succeeded.” – Maya Angelou

“Success is a science; if you have the conditions, you get the result.” – Oscar Wilde

“Success consists of going from failure to failure without loss of enthusiasm.” – Winston Churchill

“Do something you really like, and hopefully it pays the rent. As far as I’m concerned, that’s success.” – Tom Petty

“Success to me is having ten honeydew melons and eating only the top half of each slice.” – Barbra Streisand

“I must admit that I personally measure success in terms of the contributions an individual makes to her or his fellow human beings.” – Margaret Mead

“Success is peace of mind which is a direct result of self-satisfaction in knowing you did your best to become the best you are capable of becoming.” – John Wooden

“Success is finding satisfaction in giving a little more than you take.” – Christopher Reeve

“What is success? I think it is a mixture of having a flair for the thing that you are doing; knowing that it is not enough, that you have got to have hard work and a certain sense of purpose.” – Margaret Thatcher

“You know you are on the road to success if you would do your job, and not be paid for it.” – Oprah Winfrey

“The greatest sign of success for a teacher… is to be able to say, ‘The children are now working as if I did not exist.'” – Maria Montessori

Quotes on Failure and Why It’s a Key to Success 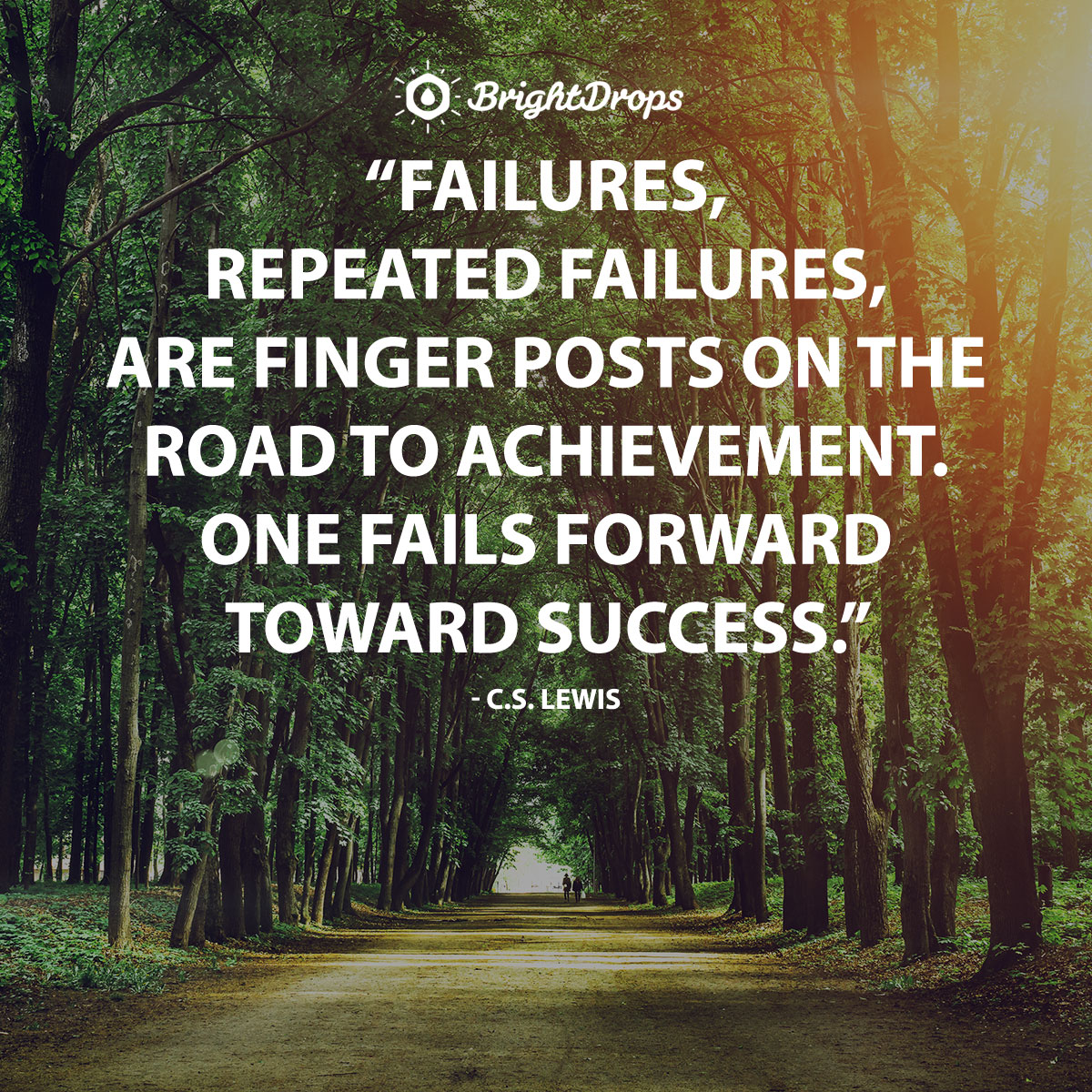 “Failures, repeated failures, are finger posts on the road to achievement. One fails forward toward success.” – C. S. Lewis

“The season of failure is the best time for sowing the seeds of success.” – Paramahansa Yogananda

“The new midlife is where you realize that even your failures make you more beautiful and are turned spiritually into success if you became a better person because of them. You became a more humble person. You became a more merciful and compassionate person.” – Marianne Williamson

“Character cannot be developed in ease and quiet. Only through experience of trial and suffering can the soul be strengthened, ambition inspired, and success achieved.” – Helen Keller

“I firmly believe that unless one has tasted the bitter pill of failure, one cannot aspire enough for success.” – A. P. J. Abdul Kalam

“Sound character provides the power with which a person may ride the emergencies of life instead of being overwhelmed by them. Failure is… the highway to success.” – Og Mandino

“The difference between us and them, between you and success, is not that you never fail, but it’s how you recover from those failures – is that you keep getting up time and time again. You figure out what you did wrong, and then you make it right. I say that to my kids every day.” – Michelle Obama

“Enjoy failure and learn from it. You can never learn from success.” – James Dyson

“Success is often achieved by those who don’t know that failure is inevitable.” – Coco Chanel

“Failure is the condiment that gives success its flavor.” – Truman Capote

Read These Quotes Next: