These Walt Disney quotes from the man himself show you just how he was able to turn a cartoon mouse into a worldwide empire.

Keep them handy if you’re wanting the same sort of success, and you have an idea that you want to become part of the real world.

1. How Courage Plays a Part in Our Dreams 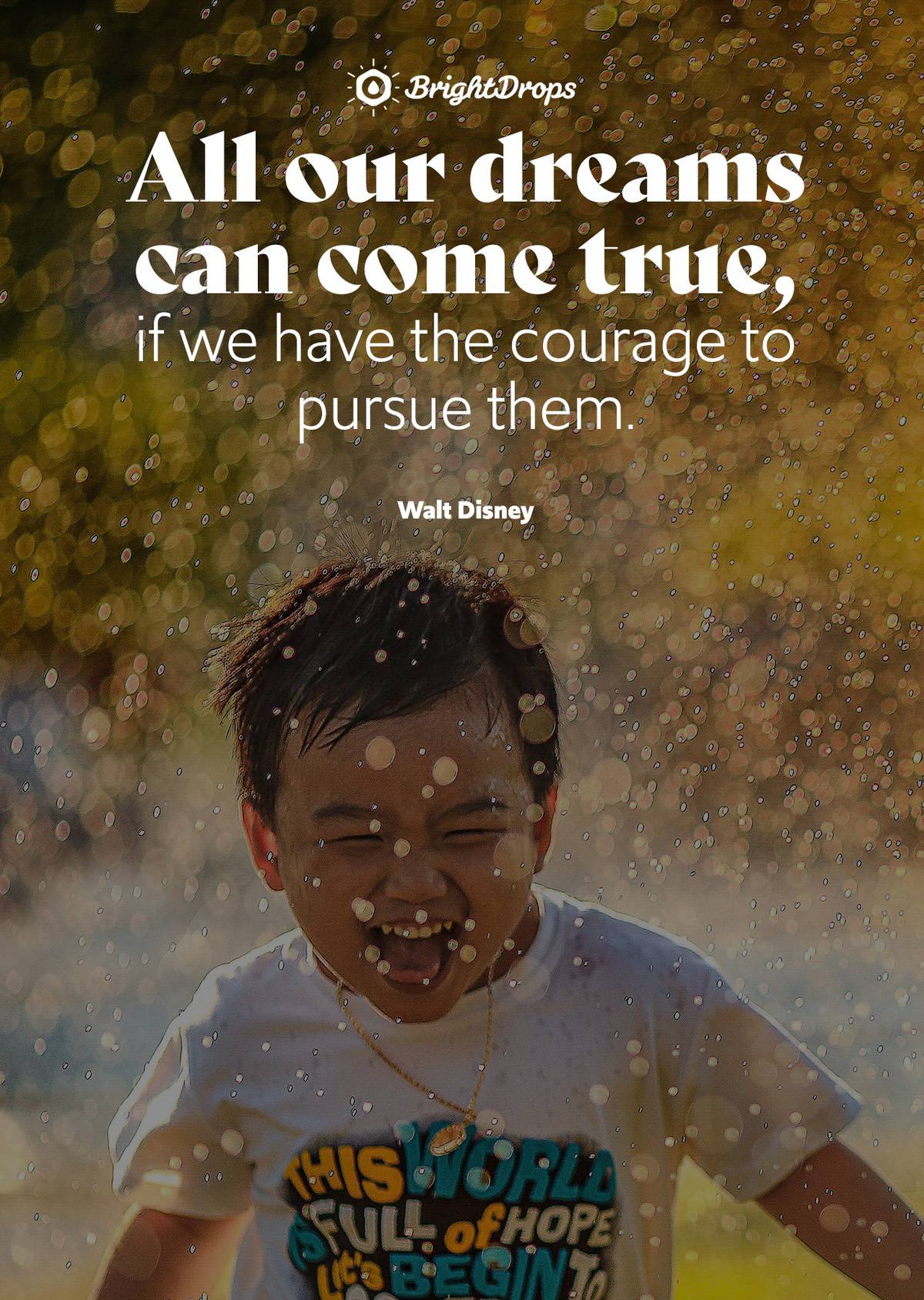 “All our dreams can come true, if we have the courage to pursue them.”

It’s not enough to have a dream, you have to pursue that dream, and this requires courage. Many of the goal books you’ll read say that you should have a dream, turn it into a goal, and get your dream bigger. This is some lousy advice because it doesn’t take into consideration the amount of courage it will take to pursue a giant dream. You have to have dreams that you believe in, and ones that you feel courageous enough to hunt down. It’s OK to start with smaller dreams that you believe in and have the courage to pursue.

2. The Silliness of Worrying 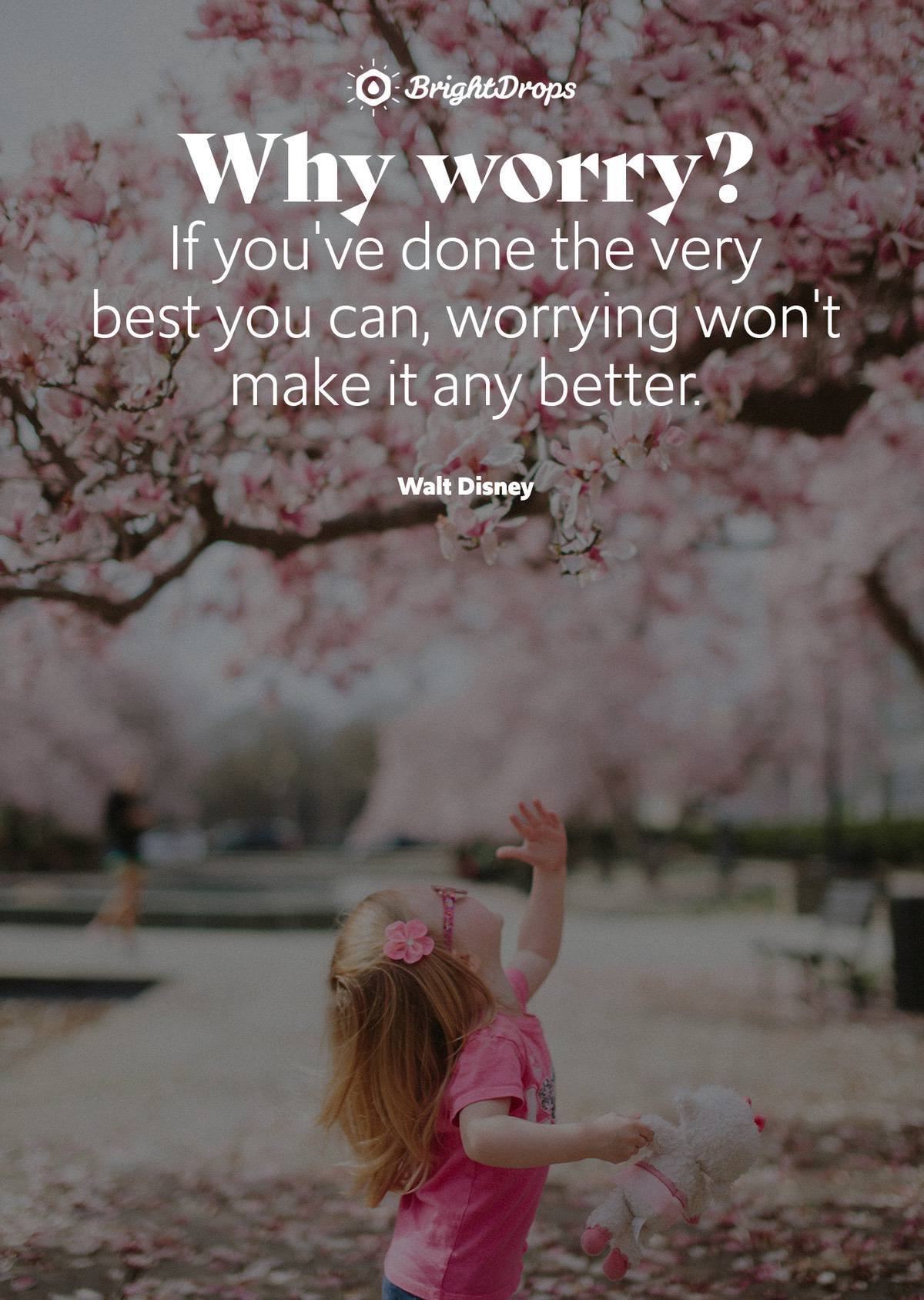 “Why worry? If you’ve done the very best you can, worrying won’t make it any better.”

Worrying never helped anything, and here Walt shows you that if you did your best there’s no need to worry. So instead of wasting mental energy worrying, you should focus that energy on doing the best you can. Not just the best you can, the very best you can, which takes that a step further. Worrying is negative goal setting, and it starts getting you to doubt yourself and your abilities. Do your best work and then stop worrying if it’s good enough. Continually try to improve on what your best is.

3. The Best Way to Start Something 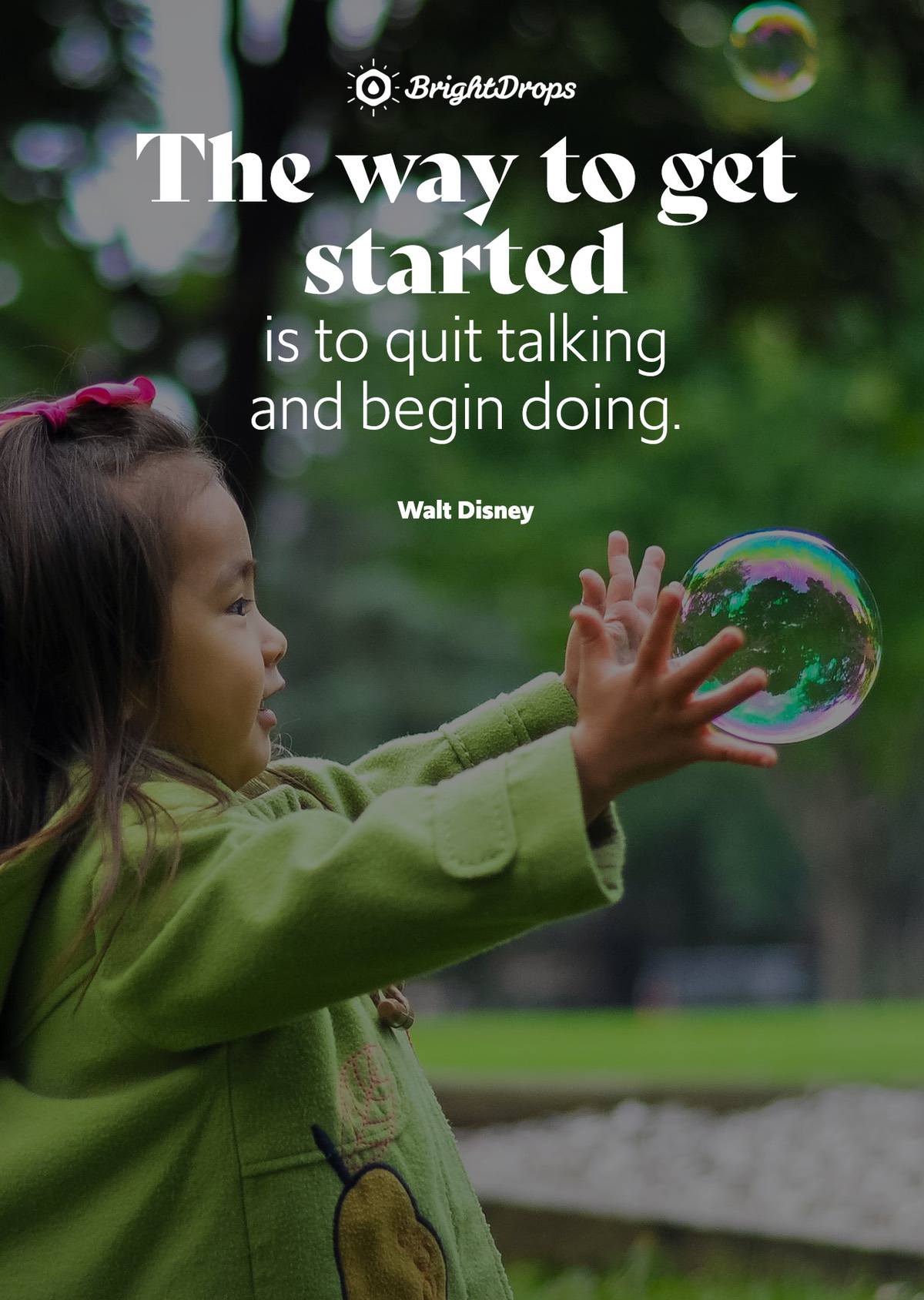 “The way to get started is to quit talking and begin doing.”

A lot of talk is just hot air, and it’s the best way to stall a project and procrastinate instead of getting started. When you find that you’re working on something that just isn’t taking off, quit talking about it and start doing things that will make it happen. This is best applied to a new idea that you’ve come up with and that you hope will come true. Walt was full of new ideas, and consistently tried to come up with new ones throughout his lifetime. He knows what it’s like to talk about something and then switch to doing.

4. On Doing the Impossible 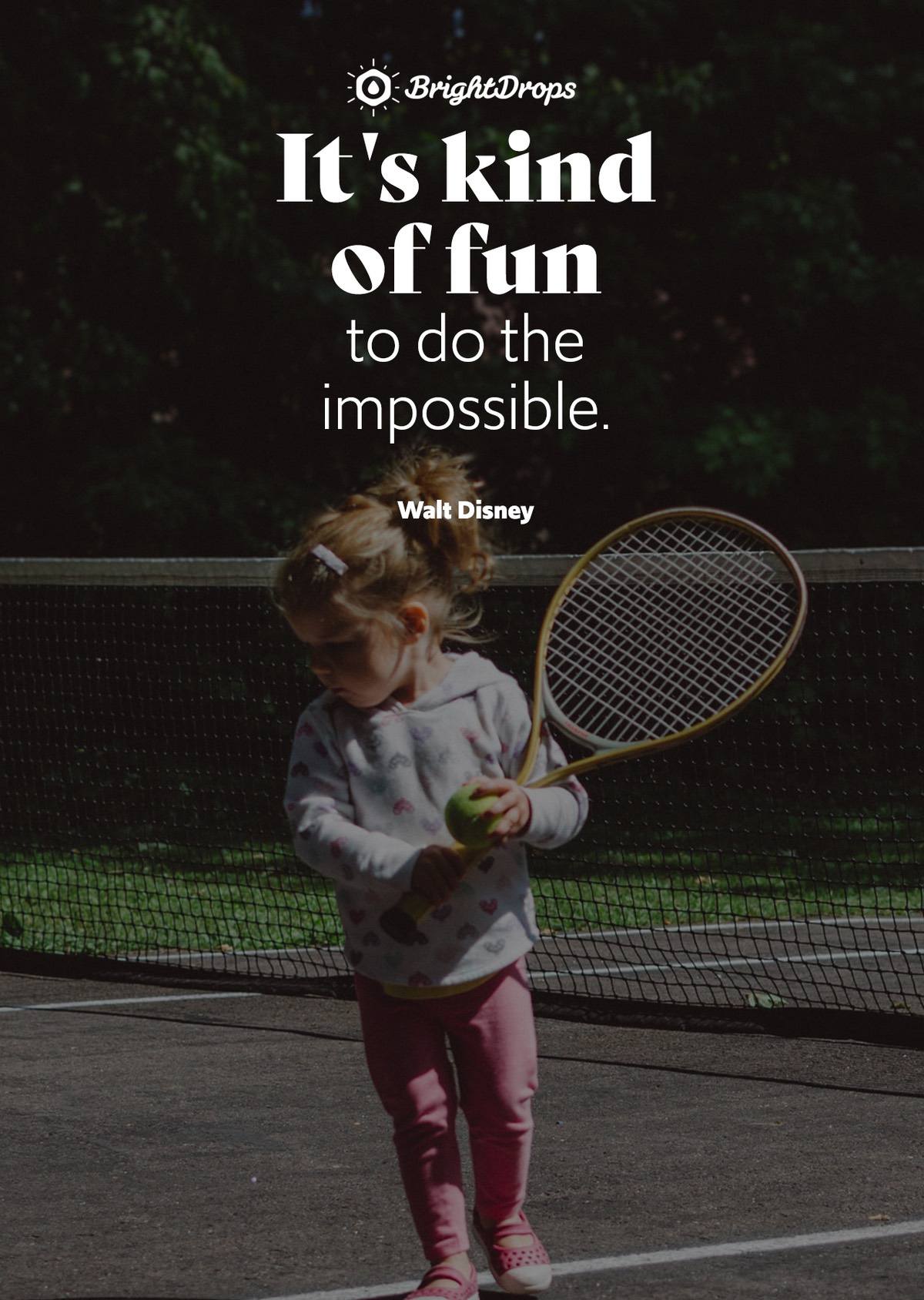 “It’s kind of fun to do the impossible.”

Doing the impossible may sound like an oxymoron, but Walt Disney proved that it isn’t time and time again. He was able to produce things that had never been produced before, and surely there were those that doubted he’d be able to breathe life into a mouse and turn it into the most recognized character in the world decades later. If you’re faced with something in your life that seems impossible, remember that when you’re doing what you once thought was impossible you’re going to feel great and it will be a lot of fun.

5. On Achieving Your Dreams 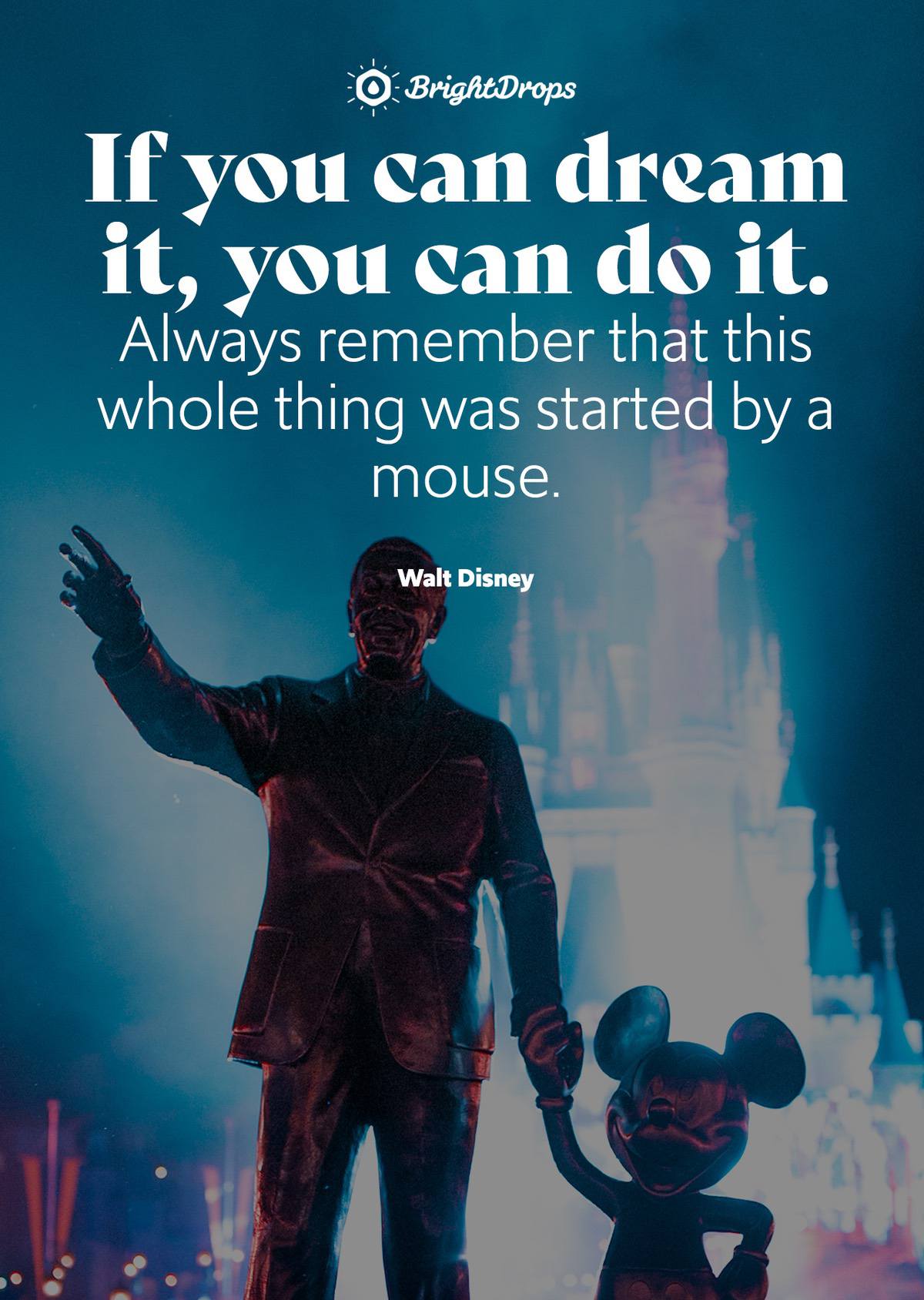 “If you can dream it, you can do it. Always remember that this whole thing was started by a mouse.”

Walt never forgot how he got started, and had an appreciation for how amazing it was that he built Disneyland off of a cartoon mouse. It really is true that if you can dream it, you can do it because there are those that have proven it time and time again. They are the ones that have built entire empires off of one simple idea. It starts with that one idea, and then you scale it up and up until you have everything you’ve ever wanted. The best place to start is where you are now with what you have now.

6. What’s Wrong with the World “That’s the real trouble with the world. Too many people grow up.”

If we all kept that inner child alive and well the world would definitely be a different place. It’s true that much of the violence and hatred in the world has been learned, and is due to things that only adults find important like land and religion. There’s a childlike innocence in each of us, but unfortunately it gets covered up by all sorts of societal pressures, cultural norms, and other influences. Walt understood this and this quote shows that things could be a lot better if more of us had the Peter Pan syndrome.

7. The Four Things It Takes Follow these four steps and there’s nothing you can’t do. First comes the thinking. Get this wrong and you’re sunk. Think the right thoughts and you’ll come up with the right idea to pursue. Then, believe like you’ve never believed before. Fall short on your belief level and you’ll never make it. Next, dream of how you want it to be, right down to the last detail. And last but not least, dare to present your idea to the world and make it all happen in reality so you can benefit from it.

8. What to Do with a Good Idea “Get a good idea and stay with it. Dog it, and work at it until it’s done right.”

Here’s the blueprint for turning that idea of yours into the Next Big Thing. You have to stay with the idea long enough for it to come into fruition. You have to work on it with passion and with the belief that it will come true. You have to work on it tirelessly and make sure that it’s done right, or don’t even bother with it. When you do the best job you can on it, you don’t have to worry that the idea was wasted on you, you’ll know that you gave it your all and it just wasn’t meant to be. “When you believe in a thing, believe in it all the way, implicitly and unquestionable.”

Here’s where the power of belief comes in. You don’t want to go halfway when it comes to believing. You want to push that level of belief way up until you believe it entirely. That’s when the real magic happens, and Walt knew a thing or two about creating magic in life. There’s just no way around it, that when you believe something with all your heart the entire universe shifts to accommodate you and give you what you want. Hold back some of that belief and it will hold back what you want.

10. The Power of Curiosity “Our greatest natural resource is the minds of our children.”

The children of the world will one day run the world, so it makes sense to protect this resource and make sure that they grow into adults that make the right choices. All too often the minds of our children are filled with disturbing images in the news and video games, as well as videos online and it is creating an epidemic of a generation that doesn’t really seem to care or try. It will be a rough road if they continue on down the path they’re headed. We have to do our best to make sure this natural resource doesn’t go to waste. “Laughter is timeless, imagination has no age, dreams are forever.”

One of the best Disney quotes around, it points to the three things that never grow old and will last forever. Laugh, imagine, and dream because it’s timeless, ageless, and goes on forever. Walt Disney lived his life adhering to this quote, was quick with a laugh, used his imagination to the fullest, and dreamed some of the biggest dreams around. Post this quote near your workstation and you’ll be reminded each day of what the most important things to do are. If you remember to laugh, dream, and imagine you’ll do just fine.

(Read this next: 23 Heartwarming Quotes About Best Friends)