If you know someone who only uses you when they need you, then check out these 28 fake people quotes.

Fake people are people who are around when you are successful and doing well but they disappear when you hit a rough patch. They are only friendly with you because you have something to offer them. They are not people you want around because they do not have your best interest in mind like a true friend should.

We have all encountered fake people. Whether some people try to be fake or it is just in their DNA, we will never know. These fake people quotes will range from advice on how to handle these people to questions about morals.

1. Sara Shepard Knows Some Friends are not True Friends 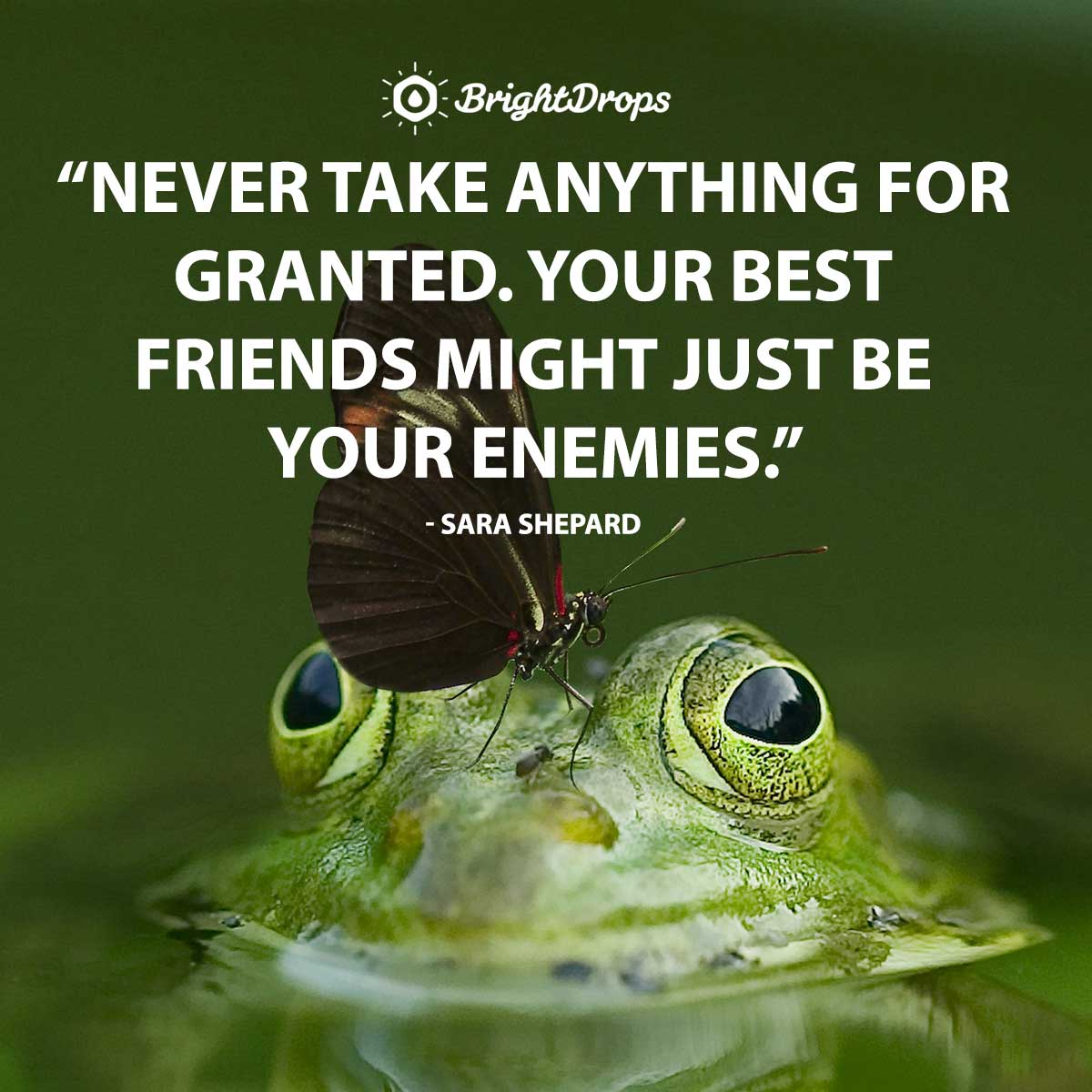 “Never take anything for granted. Your best friends might just be your enemies.” – Sara Shepard

Never take anything for granted in life. Even the people that you thought would do anything for you may be praying for your downfall. We are never really sure of people’s true intentions so be curious about your friends.

“What’s the whole point of being pretty on the outside when you’re so ugly on the inside.” – Jess C. Scott

There is no point to have a beautiful outside if you are so ugly on the inside. Even though beauty can be attractive initially, the personality is what people come to love about people. Beauty of the outside is worthless without an inside to match.

“People wear a mask of lies so they look attractive, so be careful.” – Muhammad Saqib

Be careful of the way people look on the outside. Many people will put on a front to get what they want out of you. Looks can be deceiving so the best advice is to get to know someone before you make a judgment about them. 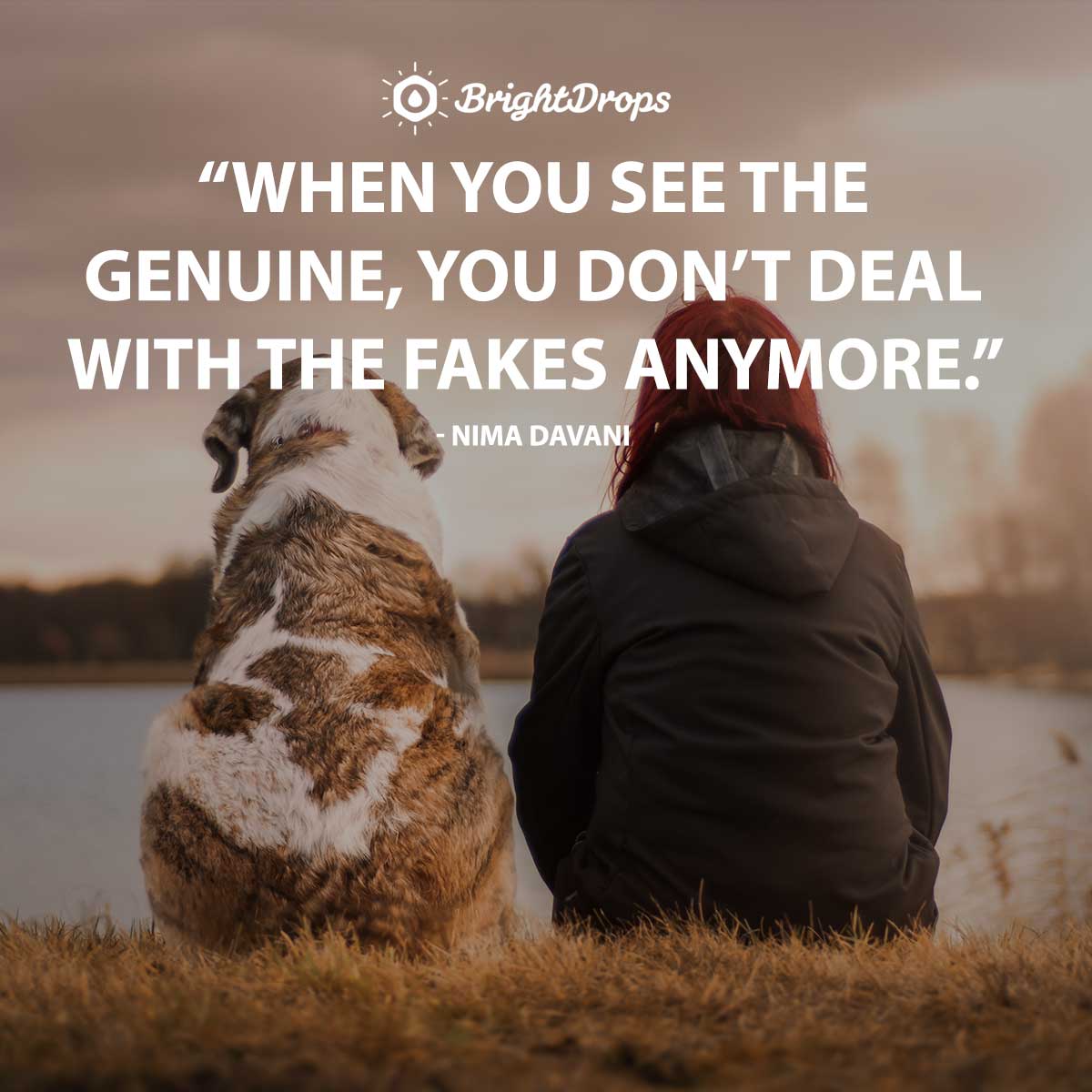 “When you see the genuine, you don’t deal with the fakes anymore.” – Nima Davani

Genuine people are great for two reasons. They are genuine in everything that they do, which is of course great for the people around them. They also show us how people are supposed to be. They make it easier to spot the people who are not genuine.

“I love fake people provided they are mannequins.” – Pushpa Rana

Fake people are only good when they are mannequins. Mannequins, of course, are actual fake people used to model clothes. Real humans that act one way but talk another way are not the people you want to be around

“I prefer to surround myself with people who reveal their imperfection, rather than people who fake their perfection.” – Charles Glassman

People who are honest about who they are and do not hold anything back are the people you want to be around. You know they are not hiding anything because they are even open to talk about their weaknesses the same way as their strengths. 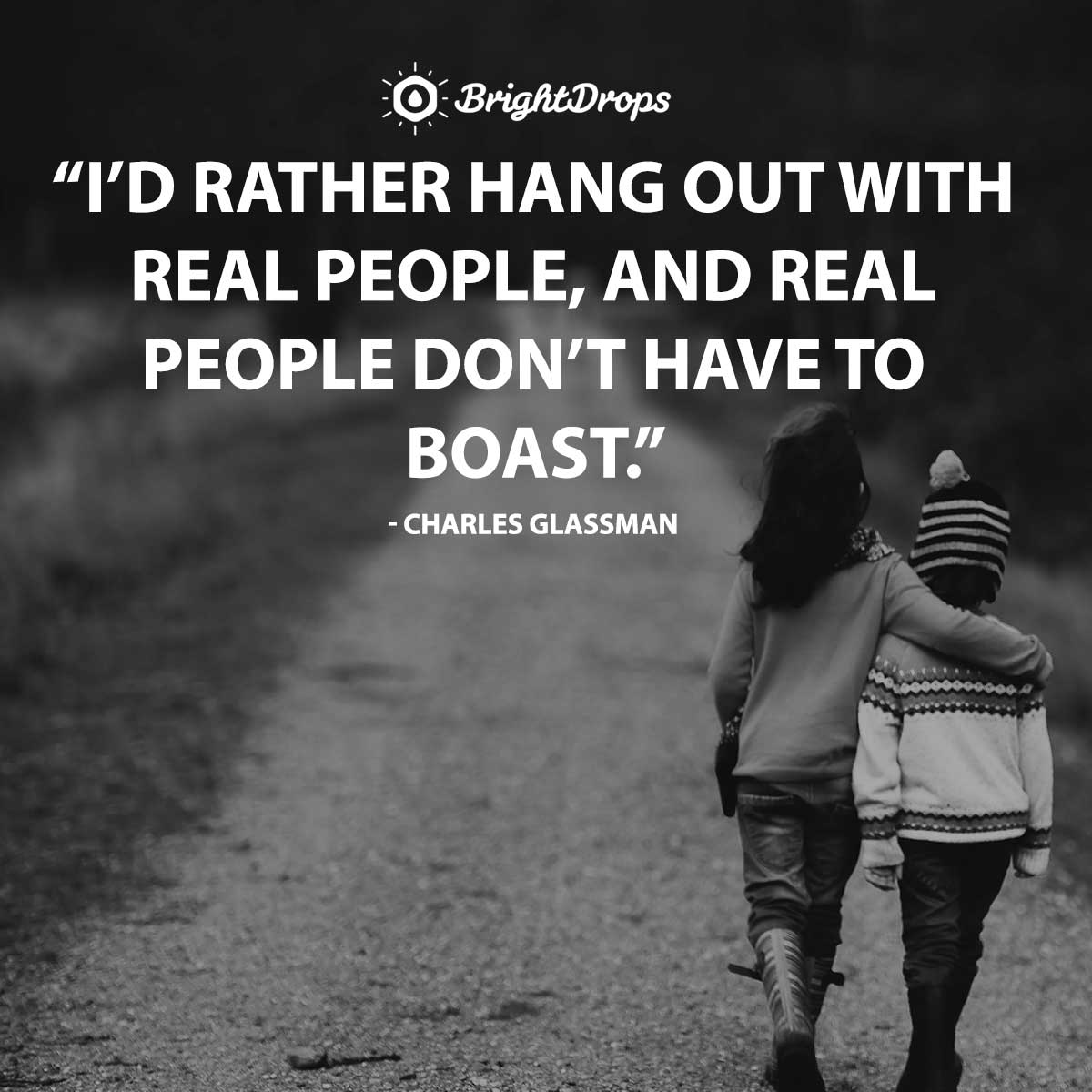 “I’d rather hang out with real people, and real people don’t have to boast.” – Charles Glassman

Real people do not need to brag about their accomplishments because they are comfortable with themselves. They do not need the approval of other people like fake people do. Real people are more enjoyable to hang out with.

“They will use you and when you are of no use, throw you away like a wrapper.” – Shizra

Fake people will use and use and use until there is nothing left. They will figure out your strengths and your value and exploit them until they get everything that they need. Fake people are only in the business in bettering themselves, not bettering anyone else.

9. Felix Caussan May have Two Faces, but They are the Same

“Everyone has two faces, but mine are twins.” – Felix Caussan

10. Michael Bassey Johnson has a Trick to Find Fake Friends

“Pretend to be poor in reality and you’ll notice a decrease in your friends list and request.” – Michael Bassey Johnson

To find out who is only hanging out with you for the things that you have and the money that you earn, pretend to be poor and see who still hangs out with you. A safe bet will say that your friends list will drop more than you might think. 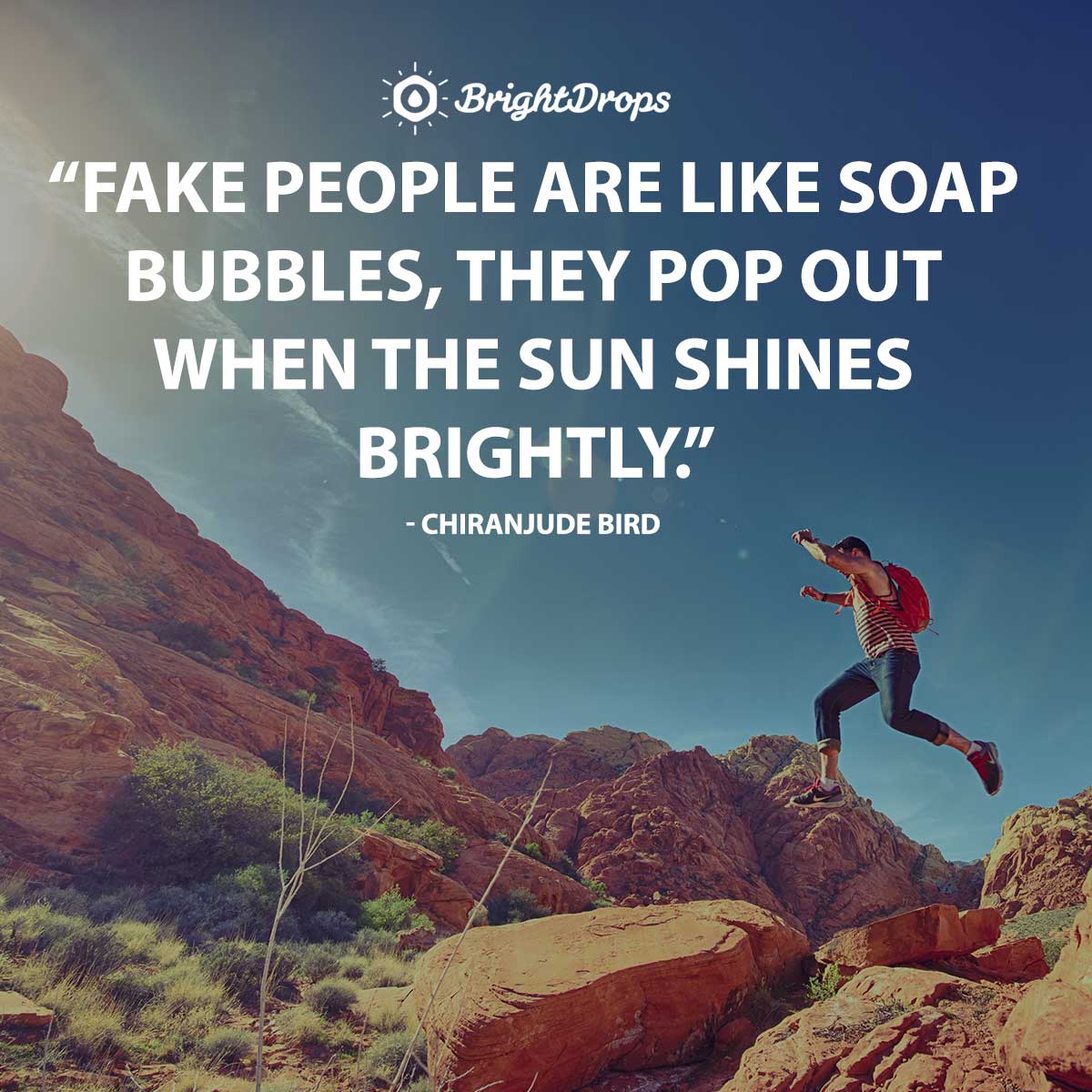 “Fake people are like soap bubbles, they pop out when the sun shines brightly.” – Chiranjude Bird

Fake people come out to greet you when everything is going great. When things are not going so well is when you will not hear from them. They are never around to help you out, only when they are able to get some sort of benefit from you.

“It’s funny how the people who know the least about you, always have the most to say.” – Auliq Ice

We see things like this all of the time, especially with celebrities. People who don’t know a thing about a successful person will say things to try and bring them down. Majority of the time it is because they are jealous of their success and fame.

“The fake world we live in conspires to make us all fakes.” – Benjamin Alire Saenz

The world that we live in pays to hide your emotions and not be yourself. Even though we are always told to be ourselves, sometimes it can pay to be someone that we are not. It is not ideal, but it is the way some aspects of life works. 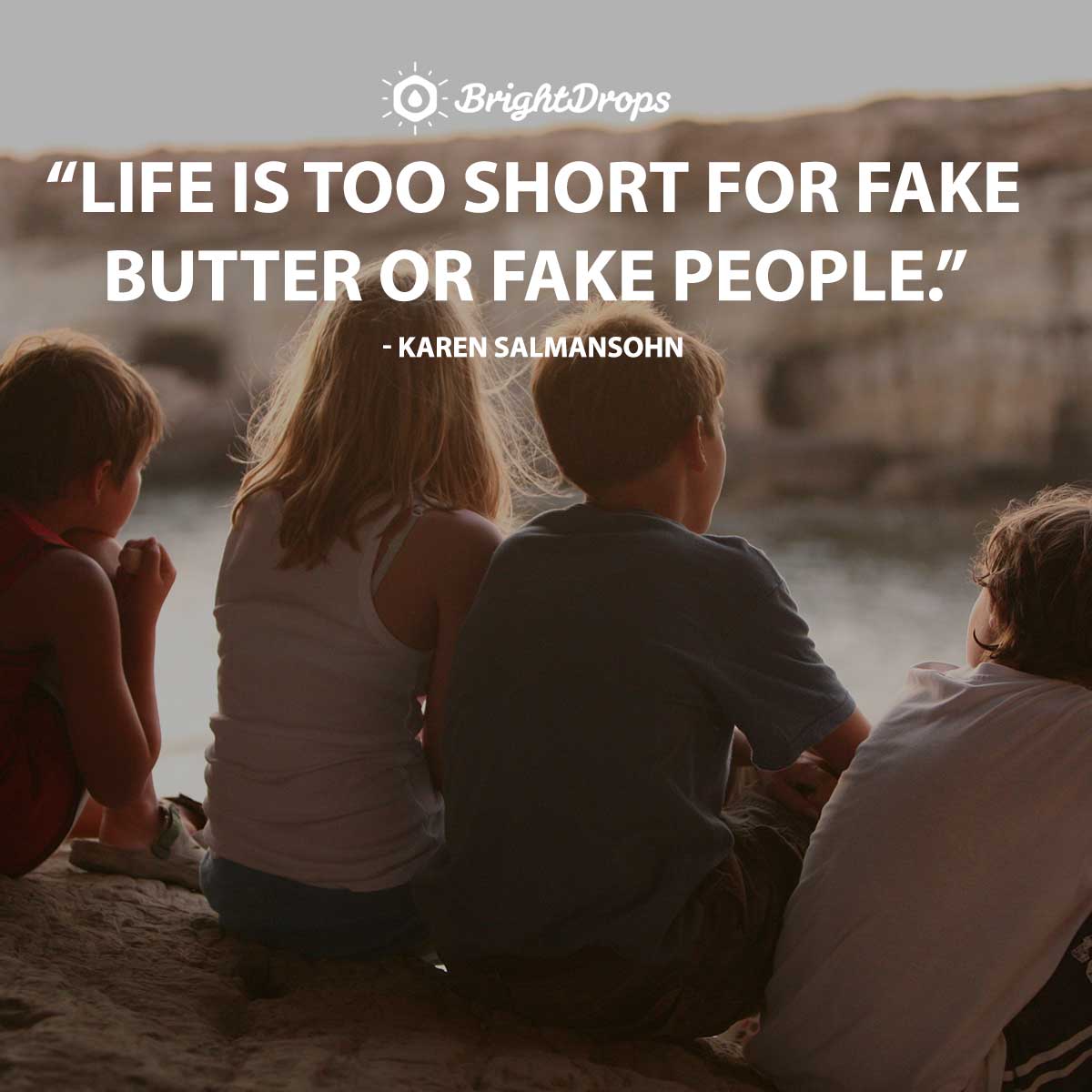 “life is too short for fake butter or fake people.” – Karen Salmansohn

There is a lot of fake butter and fake people in the world and life is much too short for either one of them. Fake people make you feel valuable and then put you down at any chance they get. You do not need people like that in your life.

“A Fake Friend is an enemy in disguise.” – Ellen Barrier

Some friends only act like they are your friend because they want to be closer to you to hurt you. Maybe you are in their way of doing something or you are more talented and they feel threatened. Either way, try to find out the true intentions of your friends.

“Out of all the things we fake we can never fake to be positive.” – Pushpa Rana

We can fake a lot of different things in life, but we cannot fake positivity. Staying positive is not something you fake because if you did not want someone to do something you would rather instill doubt in them, not tell them they are able to do it.

Children may lake morality, but they also lack fake morality and that fact may be even more important. Kids don’t know how to be fake toward another person. For the most part, they tell the truth no matter what way they see it and for that their morality is valued highly.

If two people are both being fake towards each other, there will be no benefit for either of them. Being fake never leads anywhere worthwhile. It only gives you enemies and an uneasy feeling on not knowing who you truly are.

“The true definition of a phony is a high flyer with low mileage.” – Johnnie Dent Jr.

A person who is fake a like a high flyer with a low mileage. They say they can do all of these things and can do them better than other people, but they are actually all talk and have nothing to back that claim up with.

“I wonder which face she sees when she looks into the mirror.” – C. Joybell C.

When people are fake, they are known to have “two faces.” C. Joybell C. wonders which face some people see when they look into the mirror. Do they see their actual face or do they see the face that they present to the world.

Fake friends are like shadows because you only see them when the sun is shining bright on you. when times are hard and it is cloudy, you will never seem them around. People like this do not care about you and do not deserve to be around to celebrate your successes with you.

22. Sophie Kinsella Advises you to be Careful Who you Confide In

“You tell your friends your most personal secrets, and they use them against you.” – Sophie Kinsella

When you tell your friends personal secrets and they use them against you, they are not your real friends. These are the type of people that you want to avoid. They will always be willing to listen because they want to hear details that they can use against you.

“Fake friends; those who only drill holes under your boat to get it leaking.” – Israelmore Ayivor

Metaphorically speaking, fake friends will drill a hole under your boat to get it leaking and help you in finding the person who drilled the hole. Fake friends are only around to bring you down so they can bring themselves up.

“Fake friends are with you today and against you tomorrow. Whatever they say defines them not you.” – Shizra

Fake people are with you if you are successful today and against you if you fail tomorrow. They will talk you up when you are up and talk you down when you are down. Whatever they say about you shows the kind of person they are, not who you are.

“Incessant smiling is one of the deadly tools used by someone whose intent is to make others cry.” – Michael Bassey Johnson

Someone who is constantly smiling and laughing at what you say gives you the sense that they really like you. More times than not, they are trying to get something from you or learn something about you that they can use against you.

“Real friends, are really hard to come by.” – Anthony Liccione

Real friends certainly do not grow on trees. People that you enjoy to hang out with who also have your best interest in mind are hard to come by. When you do find these people, do not take them for granted because they are not easy to find.

27. Ellen Barrier is Cautious with Secrets

“Neither a fake friend nor a liar can be trusted, with a secret.” – Ellen Barrier

28. Israelmore Ayivor Advises You to get rid of Fake Friends

“Fire false friends. They are in to fast-forward your fall and failure.” – Israelmore Ayivor

Fake friend are only by your side to make sure you fail quicker. They are threatened by you and the only thing on their mind is success for themselves. You are just someone who is in the way and they will not stop until you are out of the way.

(You may also like: 134 Cute, Funny and Wise Best Friend Quotes on the Meaning of Friendship)