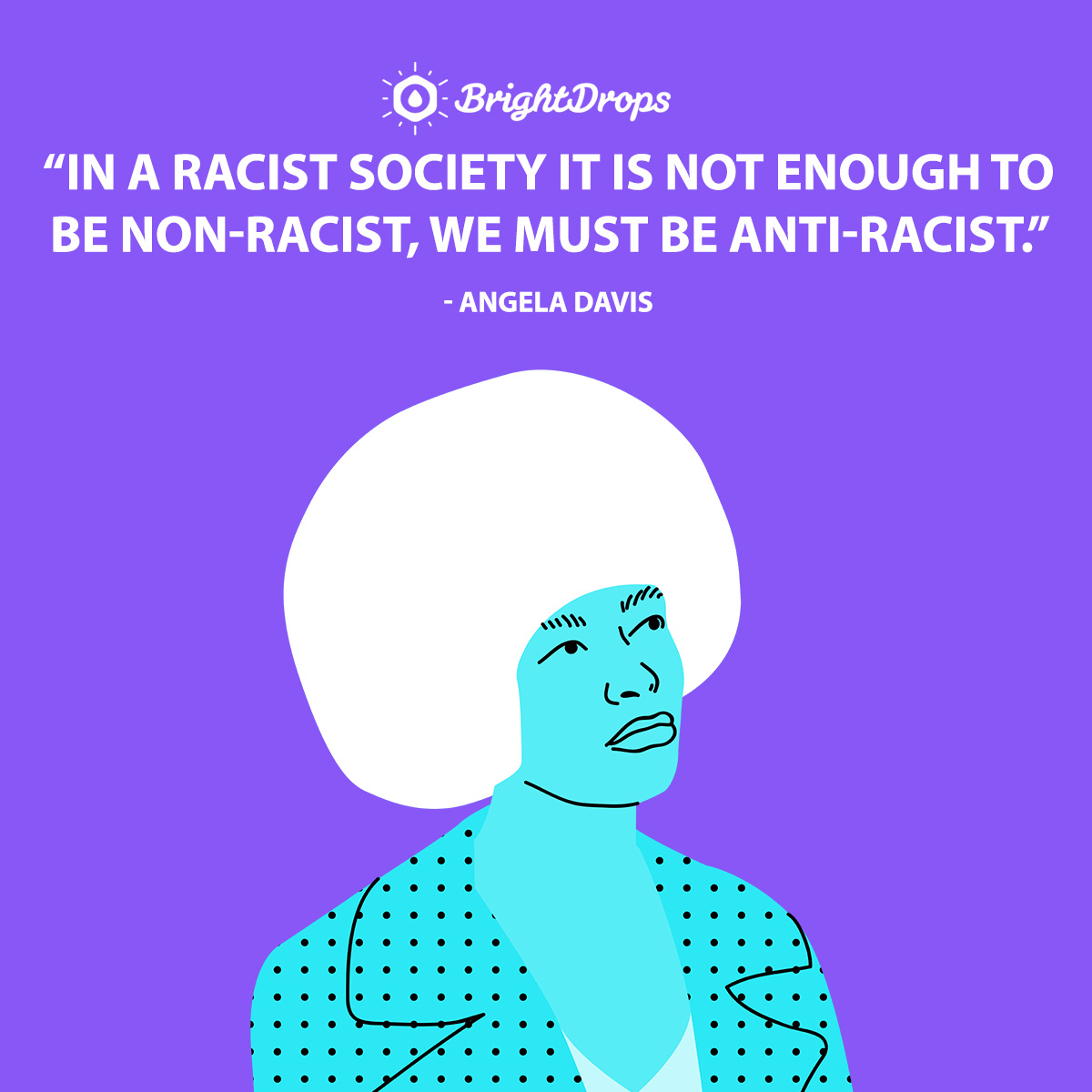 “In a racist society it is not enough to be non-racist, we must be anti-racist.” – Angela Davis

“Revolution is a serious thing, the most serious thing about a revolutionary’s life. When one commits oneself to the struggle, it must be for a lifetime.” – Angela Davis

You may also like: Maya Angelou Quotes to Empower You to Be Greater

“We still have to struggle against the impact of racism, but it doesn’t happen in the same way. I think it is much more complicated today than it ever was.” – Angela Davis

“I don’t think we have any alternative other than remaining optimistic. Optimism is an absolute necessity, even if it’s only optimism of the will, as Gramsci said, and pessimism of the intellect.” – Angela Davis

“If they come for me in the morning, they will come for you in the night.” – Angela Davis 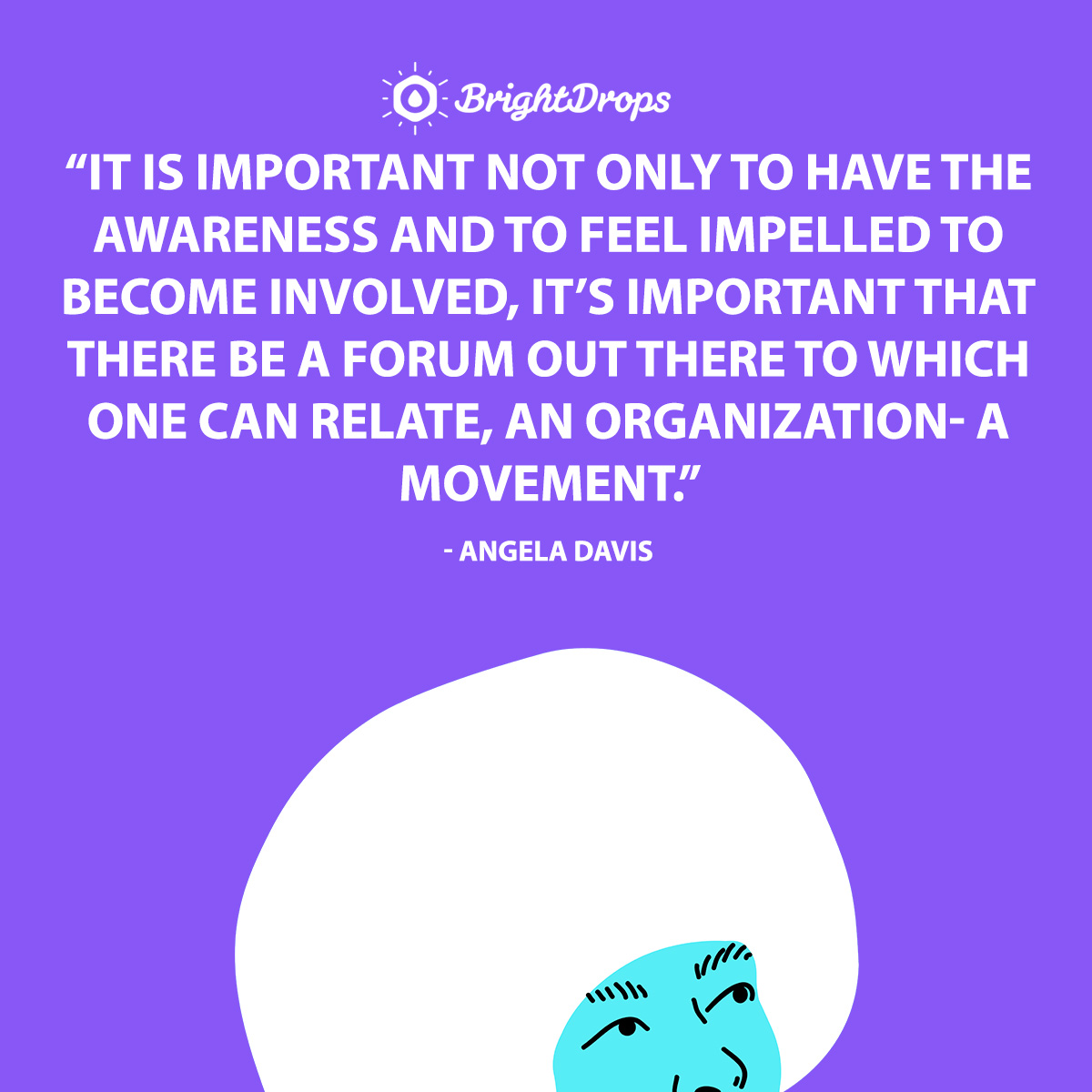 “It is important not only to have the awareness and to feel impelled to become involved, it’s important that there be a forum out there to which one can relate, an organization- a movement.” – Angela Davis

“The struggle for an abolitionist democracy is aspiring to create the institutions that will truly allow for a democratic society.” – Angela Davis

“I don’t think it’s necessary to feel guilty. Because I know that I’m still doing the work that is going to help more sisters and brothers to challenge the whole criminal justice system, and I’m trying to use whatever knowledge I was able to acquire to continue to do the work in our communities that will move us forward.” – Angela Davis

“It is in collectivities that we find reservoirs of hope and optimism.” – Angela Davis

“To understand how any society functions you must understand the relationship between the men and the women.” – Angela Davis 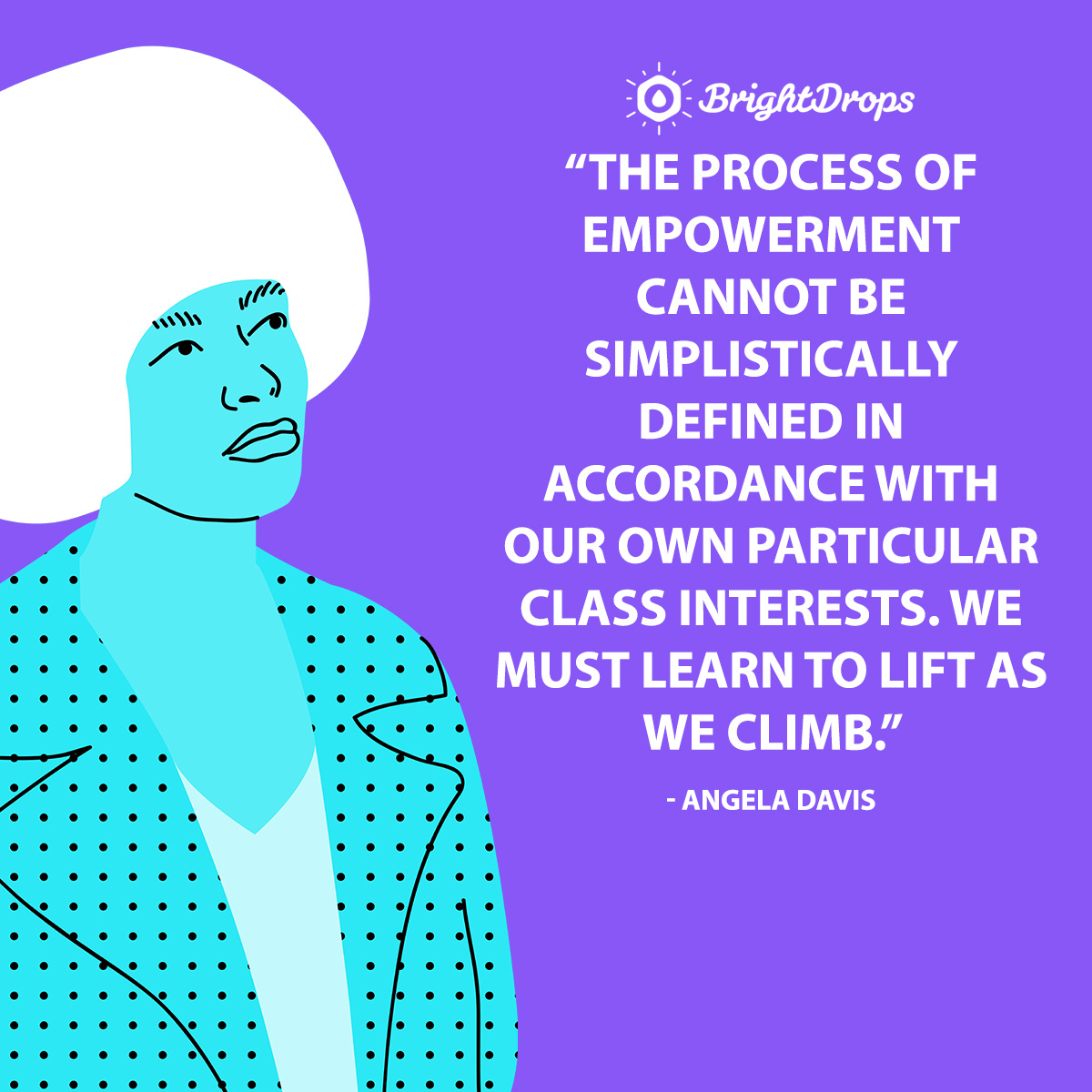 “The process of empowerment cannot be simplistically defined in accordance with our own particular class interests. We must learn to lift as we climb.” – Angela Davis

“But there’s a message there for everyone and it is that people can unite, that democracy from below can challenge oligarchy, that imprisoned migrants can be freed, that fascism can be overcome, and that equality is emancipatory.” – Angela Davis

“We have accumulated a wealth of historical experience which confirms our belief that the scales of American justice are out of balance.” – Angela Davis 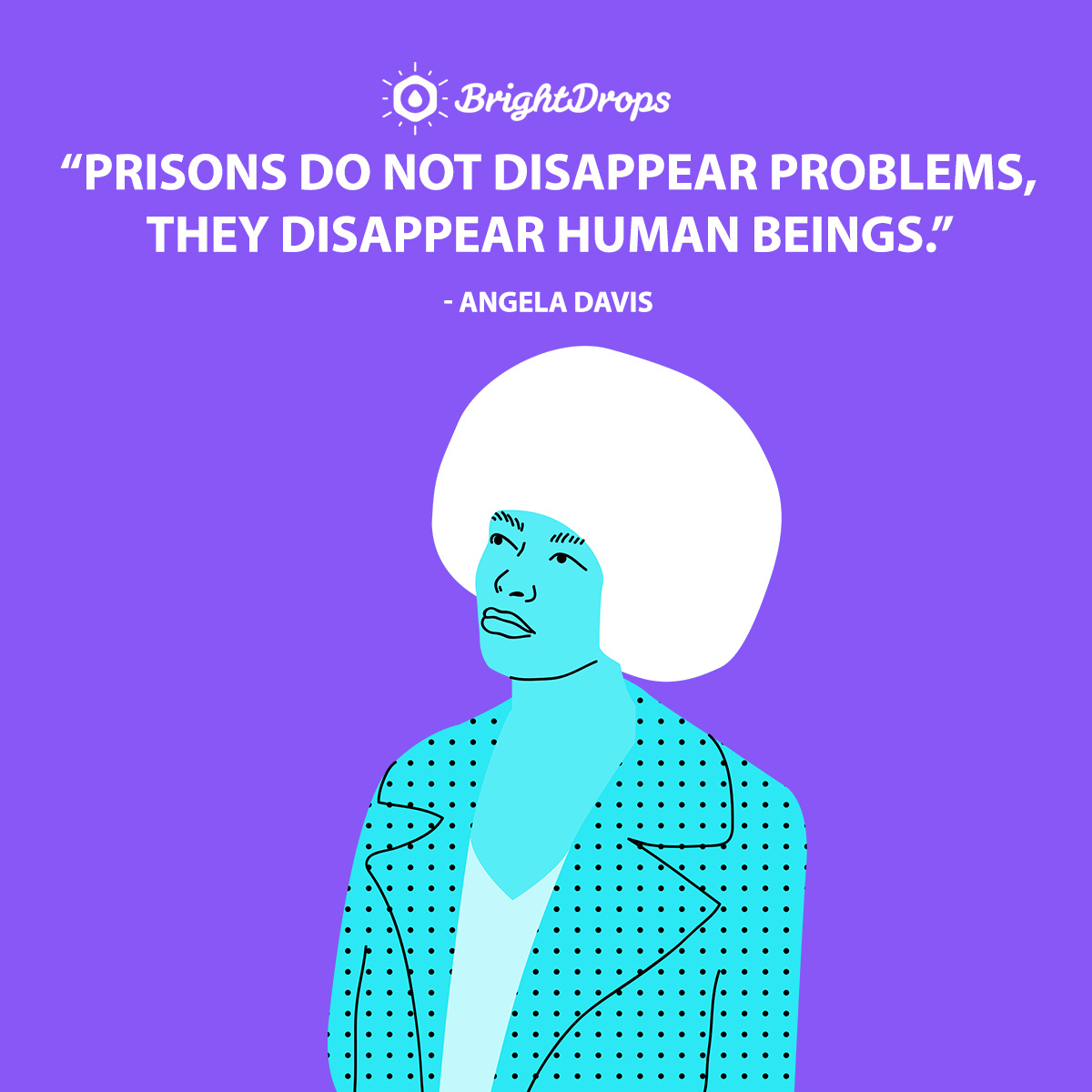 “There is so much history of this racist violence that simply to bring one person to justice is not going to disturb the whole racist edifice.” – Angela Davis

“We know the road to freedom has always been stalked by death.” – Angela Davis

“I think that has to do with my awareness that in a sense we all have a certain measure of responsibility to those who have made it possible for us to take advantage of the opportunities.” – Angela Davis

“Progressive art can assist people to learn what’s at work in the society in which they live.” – Angela Davis 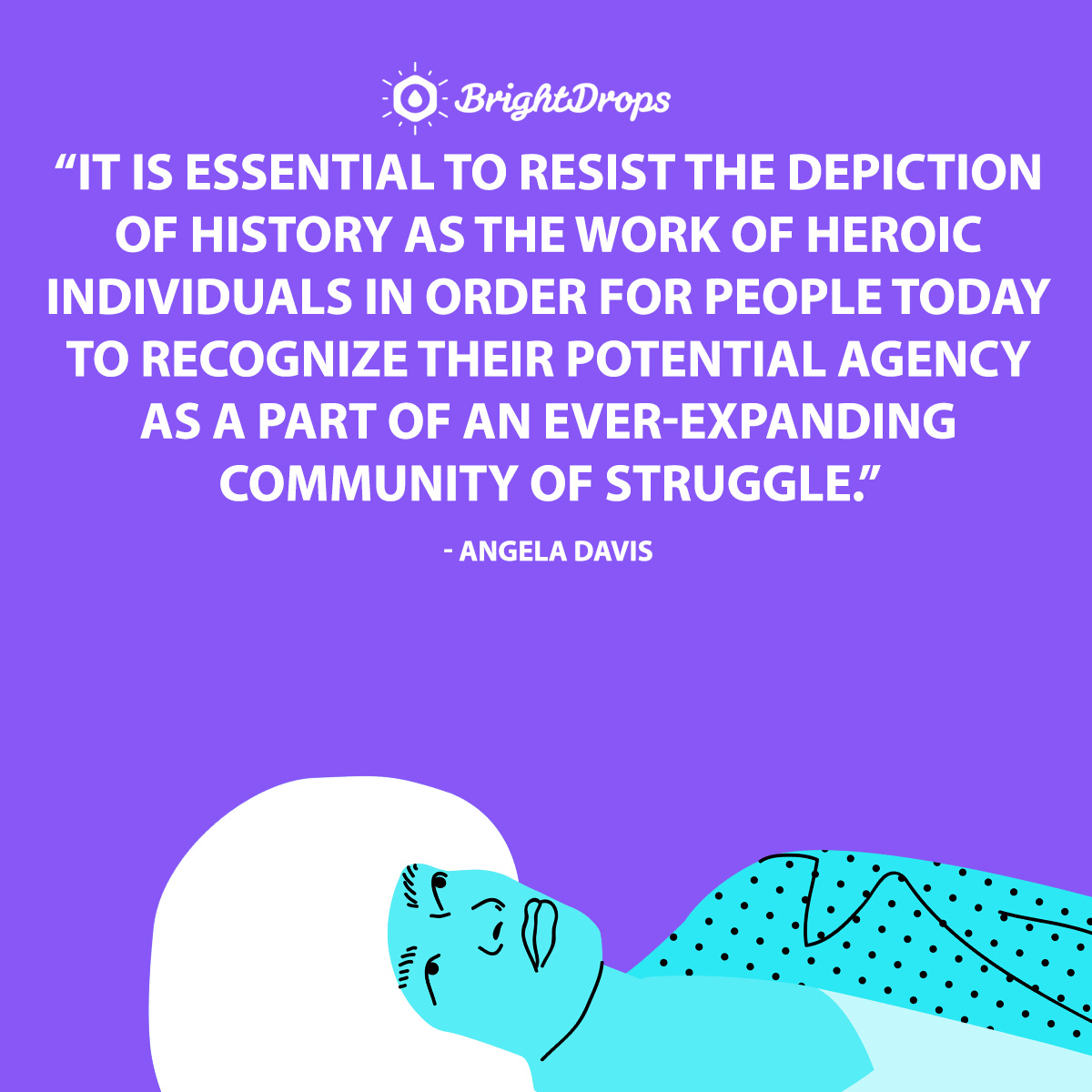 “It is essential to resist the depiction of history as the work of heroic individuals in order for people today to recognize their potential agency as a part of an ever-expanding community of struggle.” – Angela Davis

“The work of the political activist inevitably involves a certain tension between the requirement that position be taken on current issues as they arise and the desire that one’s contributions will somehow survive the ravages of time.” – Angela Davis

“We have to talk about liberating minds as well as liberating society.” – Angela Davis

“I believe profoundly in the possibilities of democracy, but democracy needs to be emancipated from capitalism. As long as we inhabit a capitalist democracy, a future of racial equality, gender equality, economic equality will elude us.” – Angela Davis

“If we do not know how to meaningfully talk about racism, our actions will move in misleading directions.” – Angela Davis 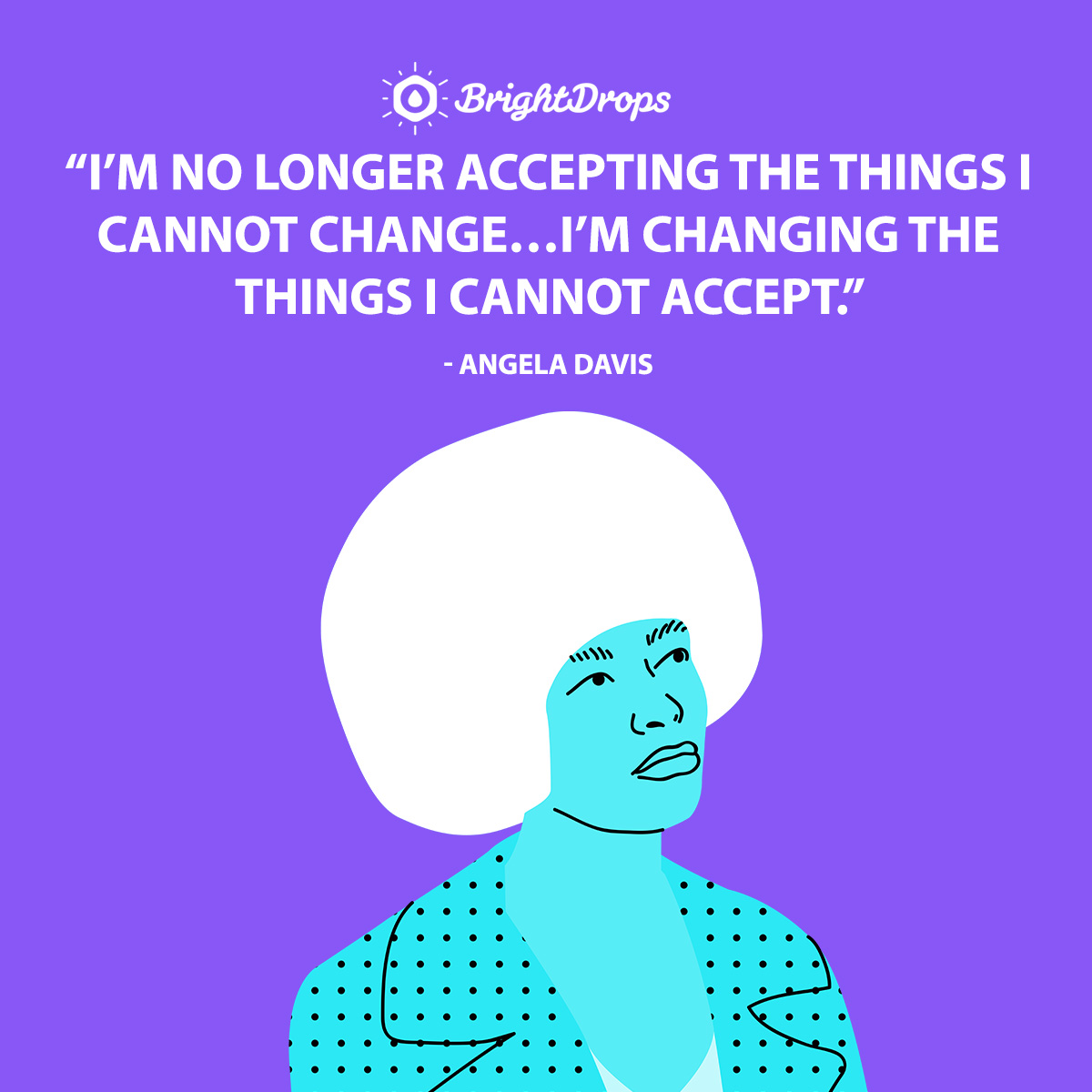 “I never saw myself as an individual who had any particular leadership powers.” – Angela Davis

“As a black woman, my politics and political affiliation are bound up with and flow from participation in my people’s struggle for liberation, and with the fight of oppressed people all over the world against American imperialism.” – Angela Davis