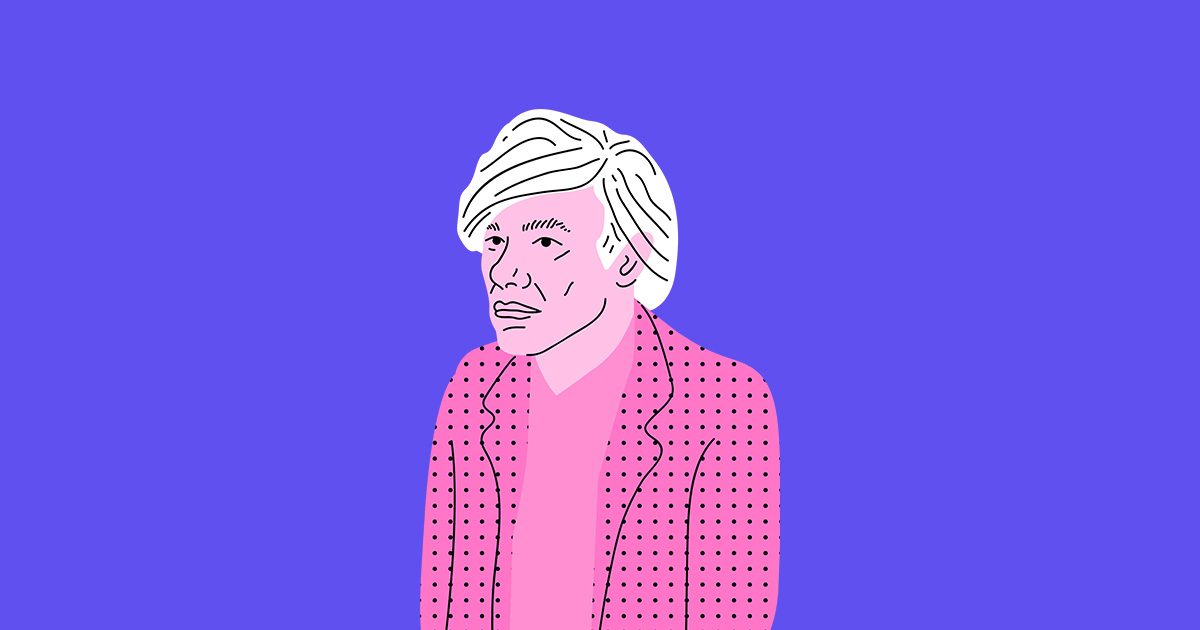 If you are searching for phrases with an artistic slant, these Andy Warhol quotes will give you plenty of food for thought. Full of wonderful imagery, beautiful sentiment, and down to earth advice, his words will give you the encouragement you’ll need to live as authentically and unapologetically as he did. 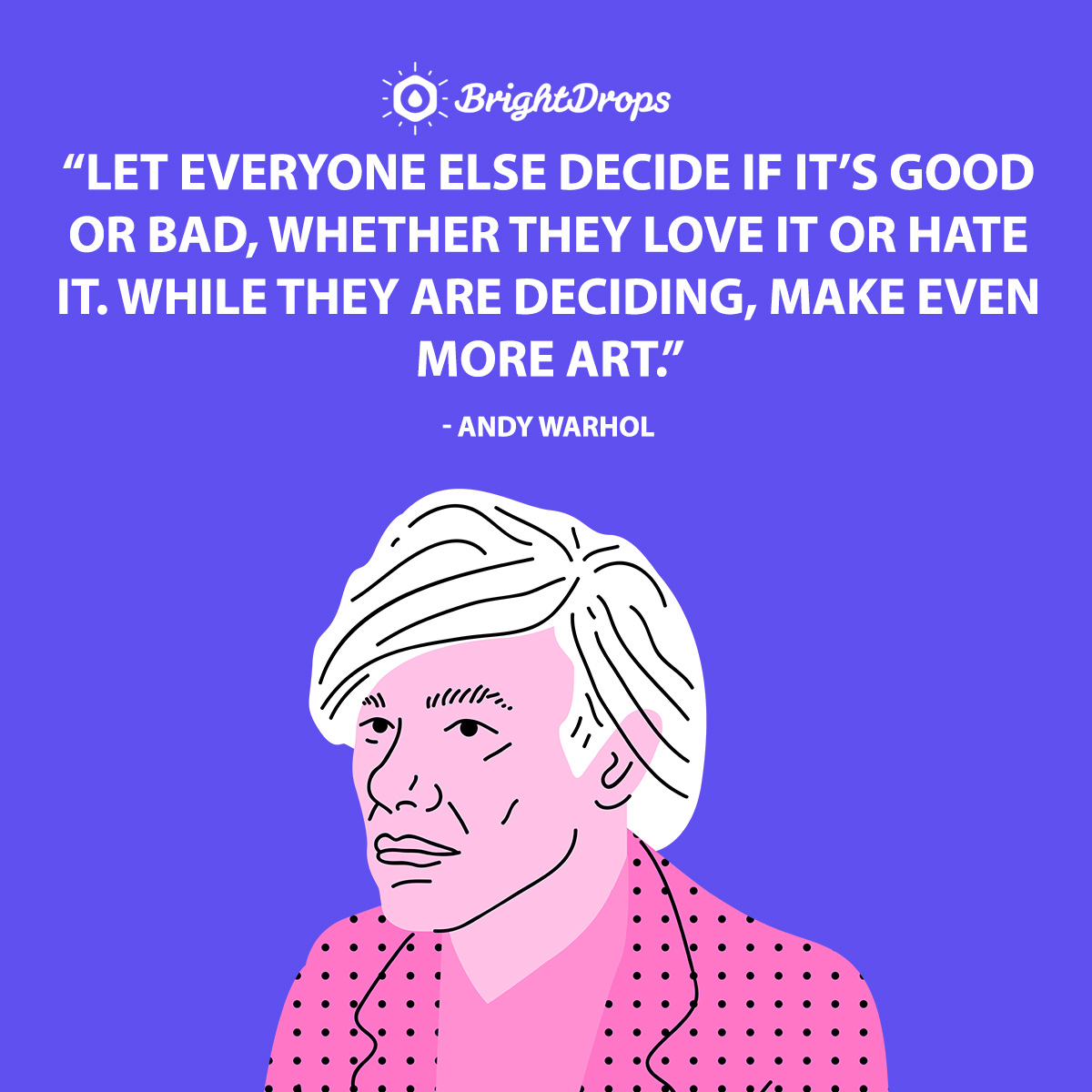 “Let everyone else decide if it’s good or bad, whether they love it or hate it. While they are deciding, make even more art.” – Andy Warhol

2. Andy Warhol on the Beauty of Imperfection

“When I did my self-portrait, I left all the pimples out because you always should. Pimples are a temporary condition and they don’t have anything to do with what you really look like. Always omit the blemishes – they’re not part of the good picture you want.” – Andy Warhol

Also read: Inspiring Quotes on Natural Beauty and Having a Beautiful Soul

3. Andy Warhol on Just Doing It

4. Andy Warhol on Not Knowing What He’s Talking About

5. Andy Warhol Quote on Learning How to Live

“People need to be made more aware of the need to work at learning how to live because life is so quick and sometimes it goes away too quickly.” – Andy Warhol

6. Andy Warhol on What Art Is 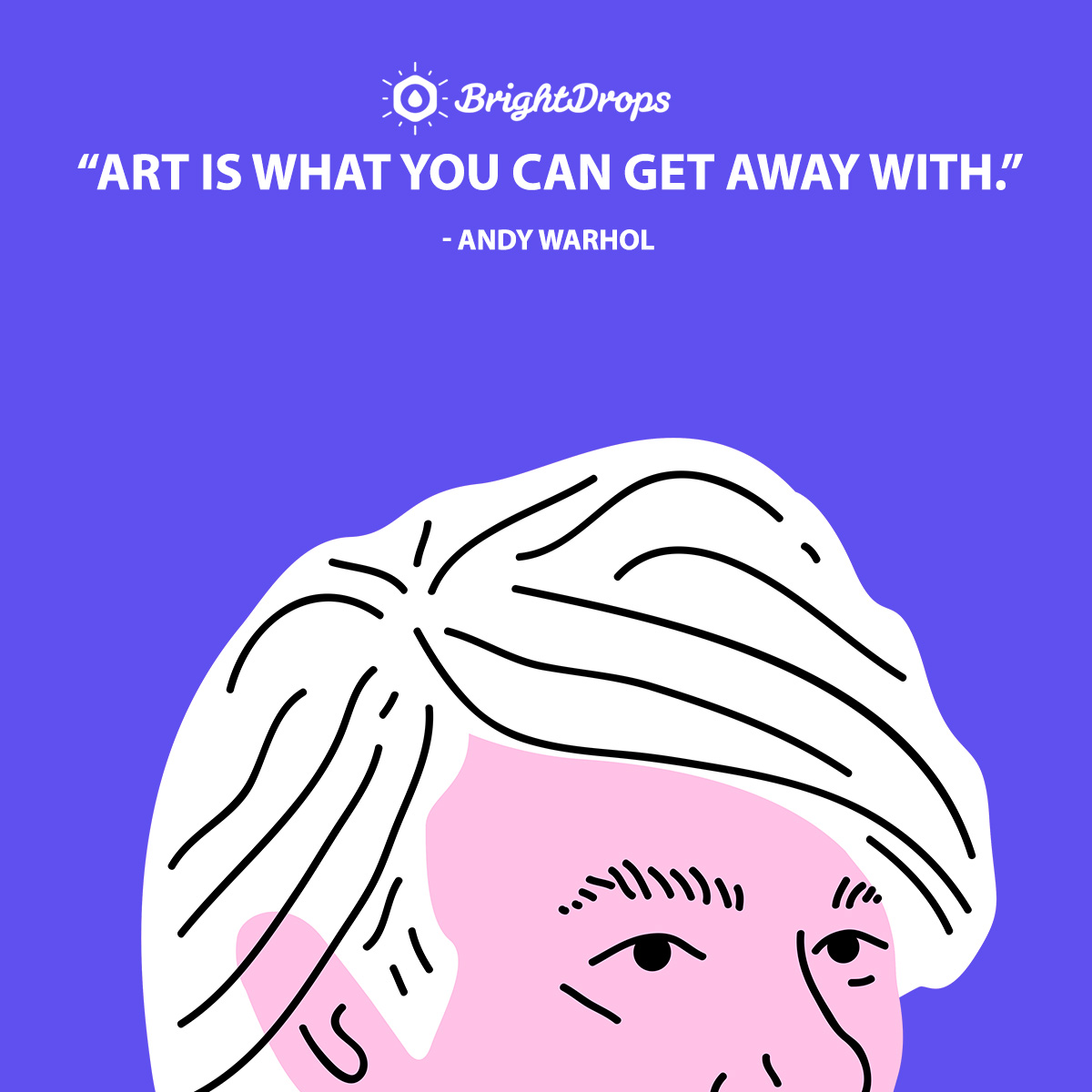 “Art is what you can get away with.” – Andy Warhol

7. Andy Warhol on Looking Too Hard

“But I’m afraid if you look at a thing long enough; it loses all of its meaning.” – Andy Warhol

8. Andy Warhol on Waiting and Patience

“The idea of waiting for something makes it more exciting.” – Andy Warhol

You may also like: 46 Jane Austen Quotes to Steer You Towards Joy and Individuality

“It doesn’t matter how slowly you go so long as you do not stop.” – Andy Warhol

“Everybody must have a fantasy.” – Andy Warhol

11. Andy Warhol on Creating Something That Lives On 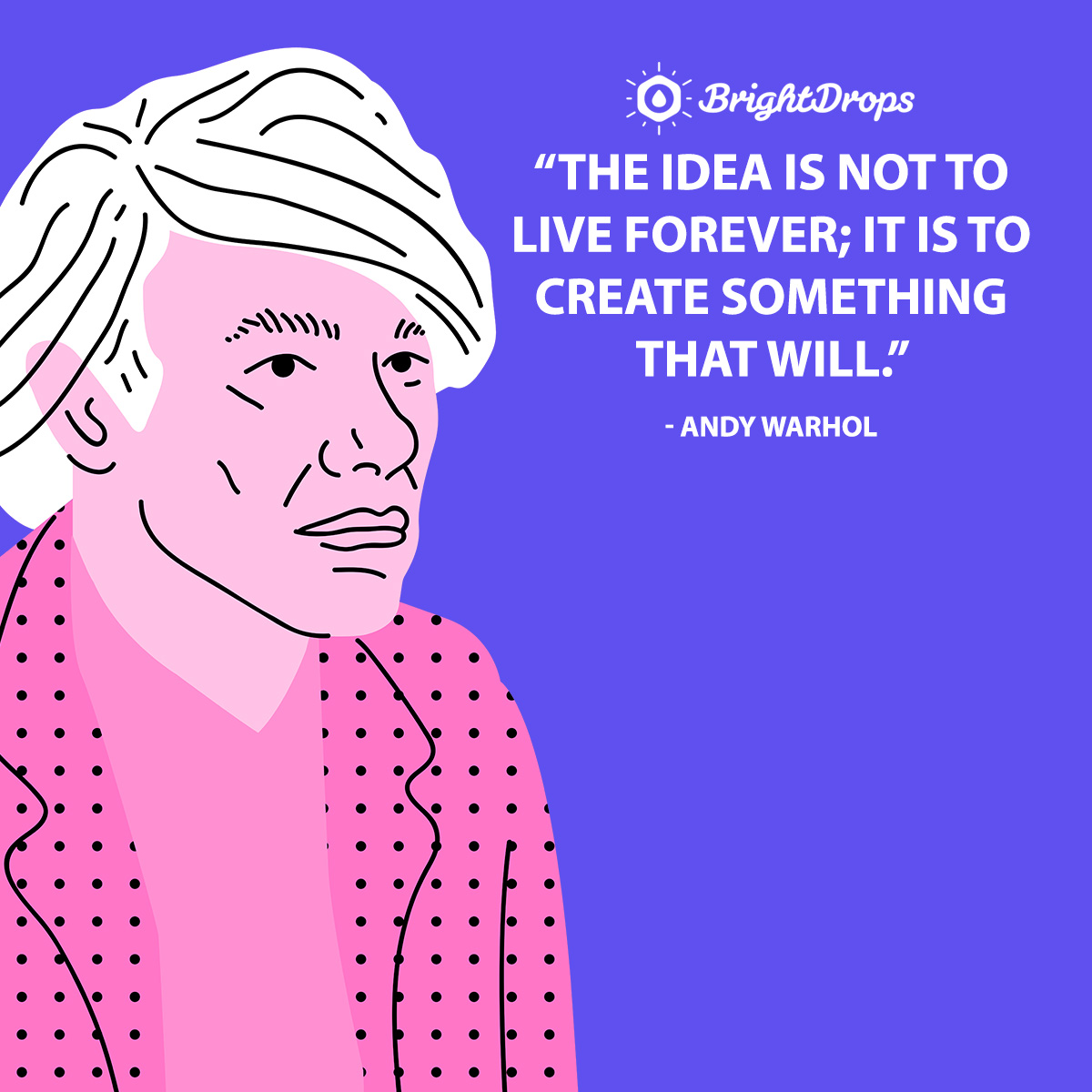 “The idea is not to live forever; it is to create something that will.” – Andy Warhol

12. Andy Warhol on Why Everything Has Beauty

“Everything has it beauty, but not everyone sees it.” – Andy Warhol

13. Andy Warhol on Who an Artist Is

“An artist is somebody who produces things that people don’t need to have.” – Andy Warhol

14. Andy Warhol on Beauty and Intelligence

15. Andy Warhol Quote on the Power of Saying ‘So What?’

“Sometimes people let the same problem make them miserable for years when they could just say, ‘So what.’ That’s one of my favorite things to say. ‘So what.'” – Andy Warhol

Learn more: 11 Habits to Develop an Attitude of Gratitude In Every Situation

16. Andy Warhol on the Beach 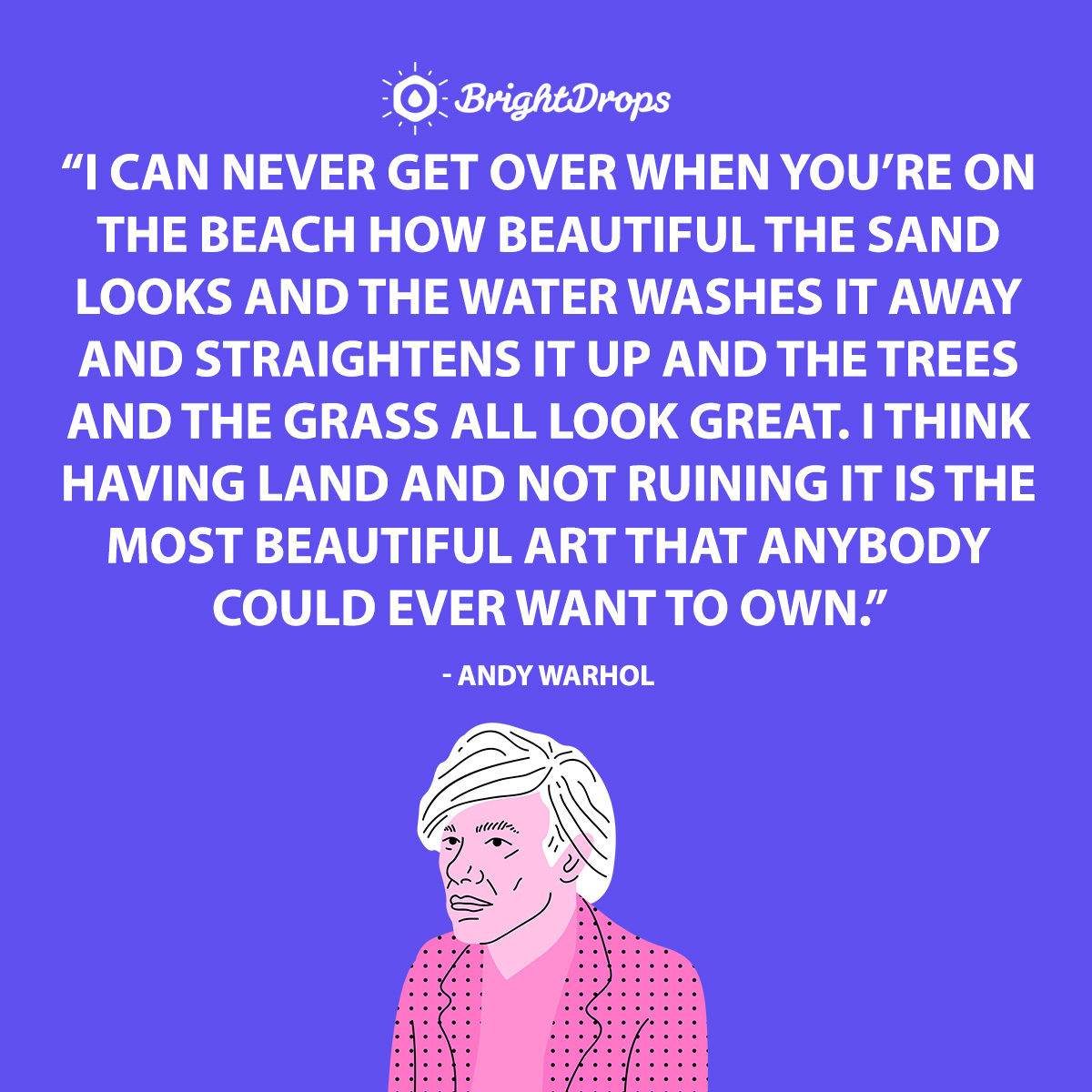 “I can never get over when you’re on the beach how beautiful the sand looks and the water washes it away and straightens it up and the trees and the grass all look great. I think having land and not ruining it is the most beautiful art that anybody could ever want to own.” – Andy Warhol

“A picture means I know where I was every minute. That’s why I take pictures. It’s a visual diary.” – Andy Warhol

18. Andy Warhol on Why He Does Art

“I just do art because I’m ugly and there’s nothing else for me to do.” – Andy Warhol

“They always say time changes things, but you actually have to change them yourself.” – Andy Warhol 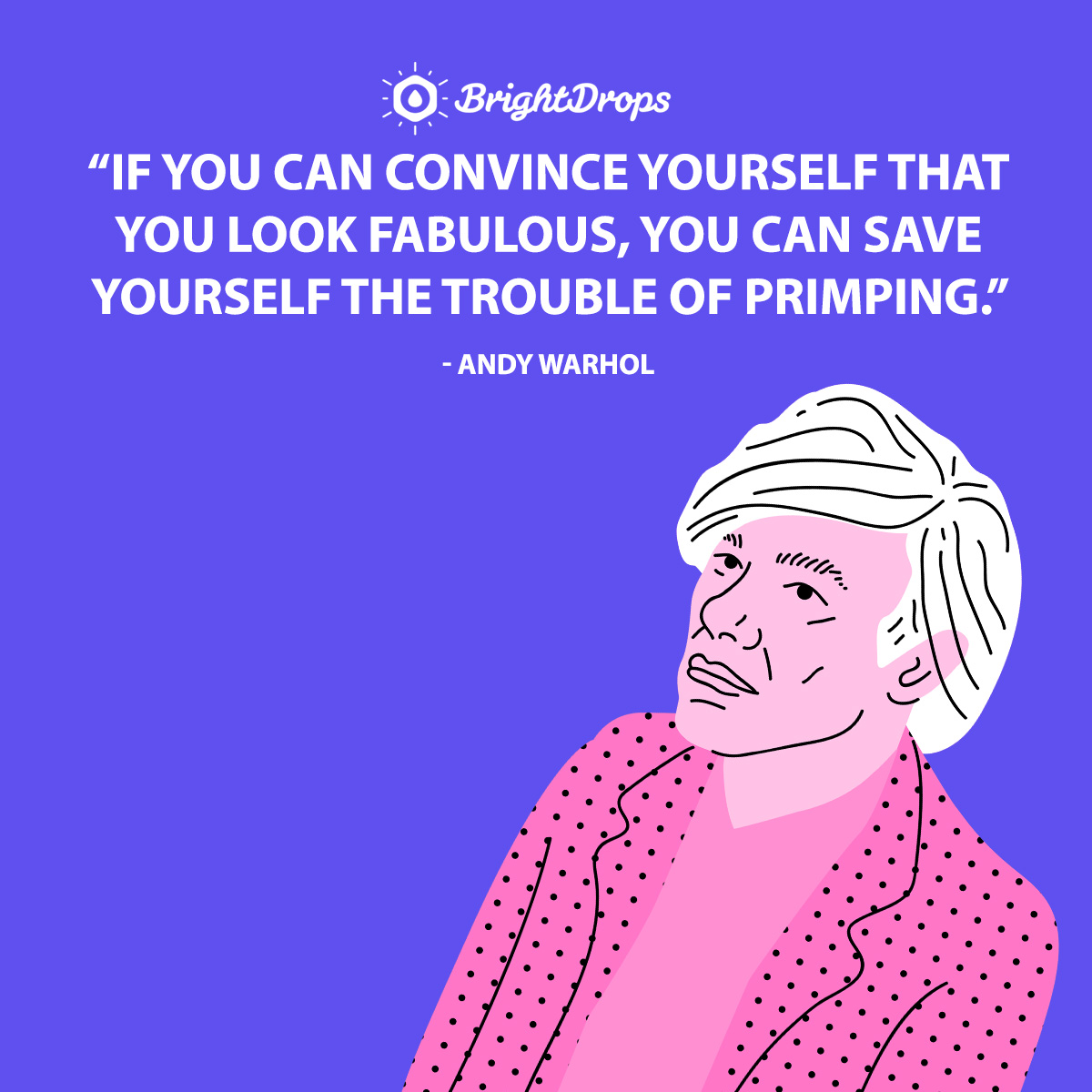 “If you can convince yourself that you look fabulous, you can save yourself the trouble of primping.” – Andy Warhol

“Just because people throw it out and don’t have any use for it, doesn’t mean it’s garbage.” – Andy Warhol

Who Was Andy Warhol?

American artist Andy Warhol turned the art world on its head when he pioneered the genre known as ‘Pop Art’, taking everyday, commercially mass produced objects and turning them into art, like his famous Campbell’s Soup painting, as well as portraits of celebrities including Marilyn Monroe and Elvis Presley.

A serious and rare illness at the age of eight confined Warhol to bed for many months, and it was during this time that he first developed an interest in art, courtesy of his mother who was a keen artist herself and who gave him his first lesson in drawing.

His work is still very much in evidence today, more than 30 years after his death, and can be seen on t-shirts and posters in stores across the world, but he was also a film director and producer who is probably most known for his 1965 adaptation of Anthony Burgess’ novel ‘A Clockwork Orange’.

When he died from heart arrhythmia in 1987, his will stated that his entire estate be used to create a foundation for the advancement of visual arts, which was created that same year.