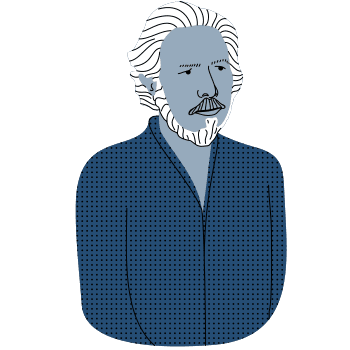 Although Alan Watts spent time working as an Episcopal priest in the United States, he is renowned for bringing – or popularizing – Buddhism to the Western World. Host of the radio show ‘Way Beyond the West’, he went from Buddhism teacher to the foremost authority on Eastern disciplines in the West.

Author of more than 25 books on philosophy and religion, Watts was responsible for introducing us to Zen Buddhism and spirituality, and inspired generations to move to a more peaceful way of thinking. Credited with being the ‘father’ of the hippie uprising in the sixties, Watts gave people young and old the key to a gentler existence.

If you’re looking for inspirational words to help to change your way of thinking, you can’t go far wrong with Alan Watts quotes. Profound and deeply thought-provoking, his sayings will help you to see life, love, and humankind in a different way, and give you a sense of the Zen that he strove to teach.

Alan Watts Quotes on Love and Loving Yourself 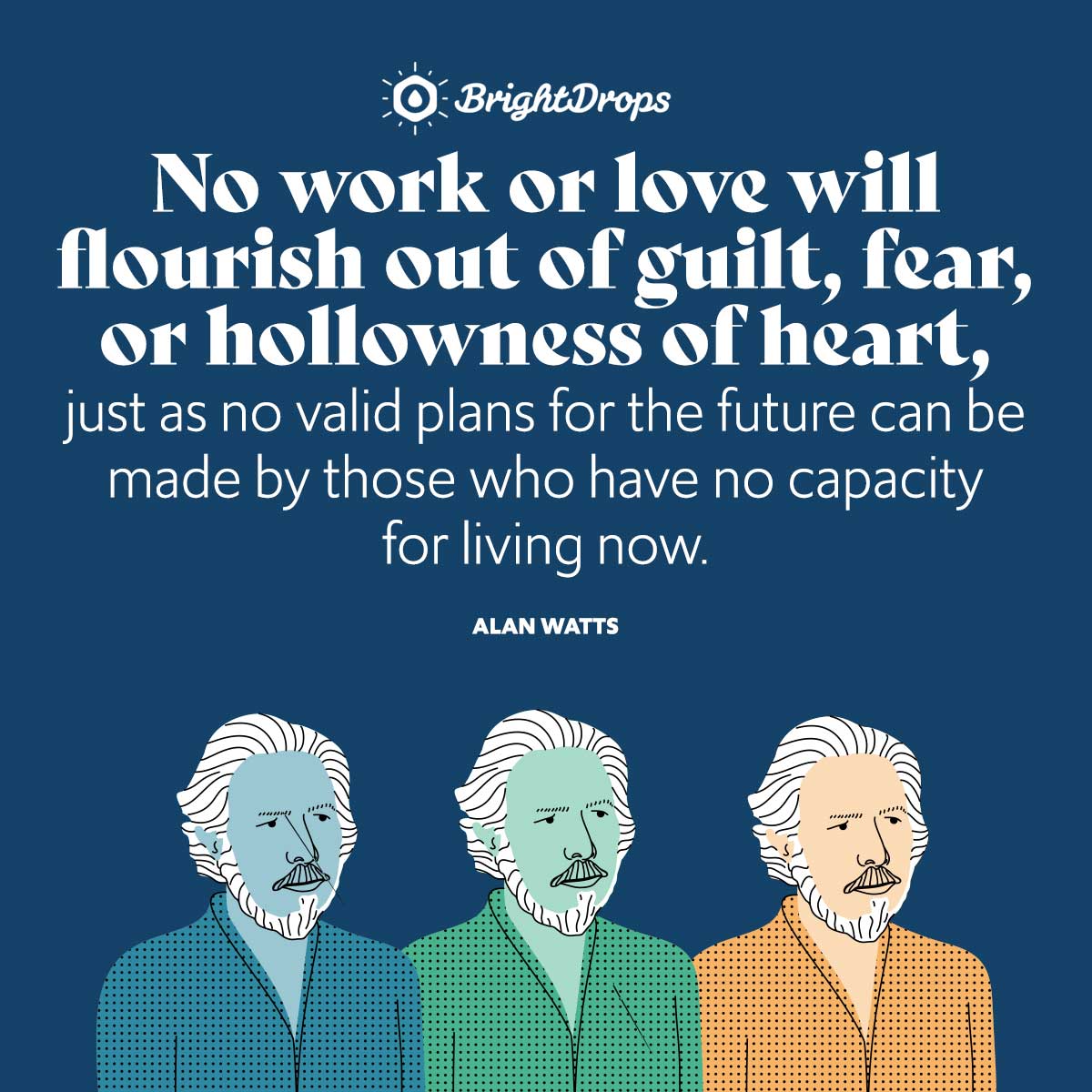 “No work or love will flourish out of guilt, fear, or hollowness of heart, just as no valid plans for the future can be made by those who have no capacity for living now.” – Alan Watts

“So then, the relationship of self to other is the complete realization that loving yourself is impossible without loving everything defined as other than yourself.” – Alan Watts

“Never pretend to a love which you do not actually feel, for love is not ours to command.” – Alan Watts

“The world is filled with love-play, from animal lust to sublime compassion.” – Alan Watts

“Love is not something that is a sort of rare commodity, everybody has it.” – Alan Watts

“Everyone has love, but it can only come out when he is convinced of the impossibility and the frustration of trying to love himself.” – Alan Watts

“People who exude love are apt to give things away. They are in every way like rivers; they stream. And so when they collect possessions and things they like, they are apt to give them to other people. Because, have you ever noticed that when you start giving things away, you keep getting more?” – Alan Watts

“Life and love generate effort, but effort will not generate them.” – Alan Watts 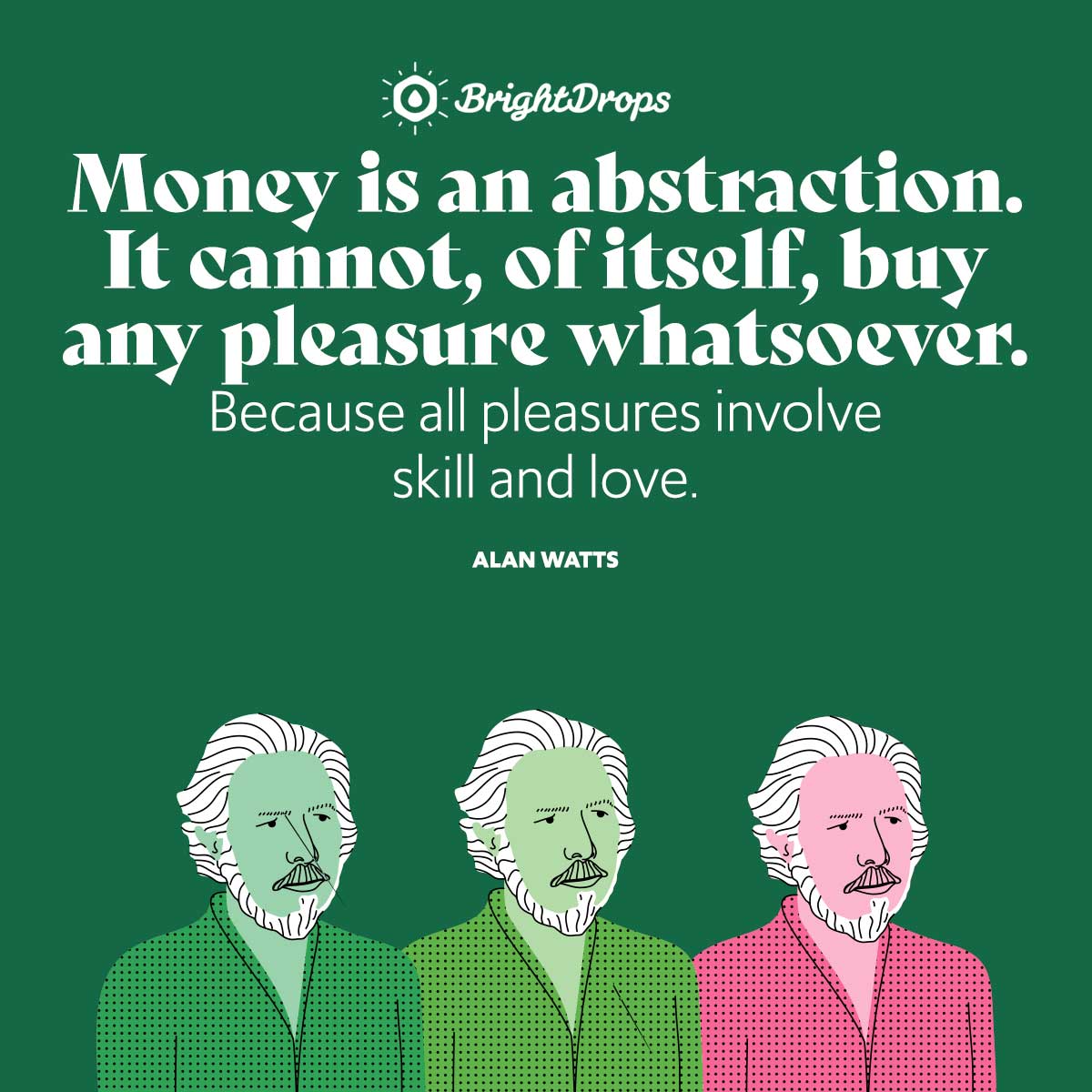 “Money is an abstraction. It cannot, of itself, buy any pleasure whatsoever. Because all pleasures involve skill and love.” – Alan Watts

“Money alone cannot buy pleasure, though it can help. For enjoyment is an art and a skill for which we have little talent or energy.” – Alan Watts

Alan Watts Quotes on the Universe and You 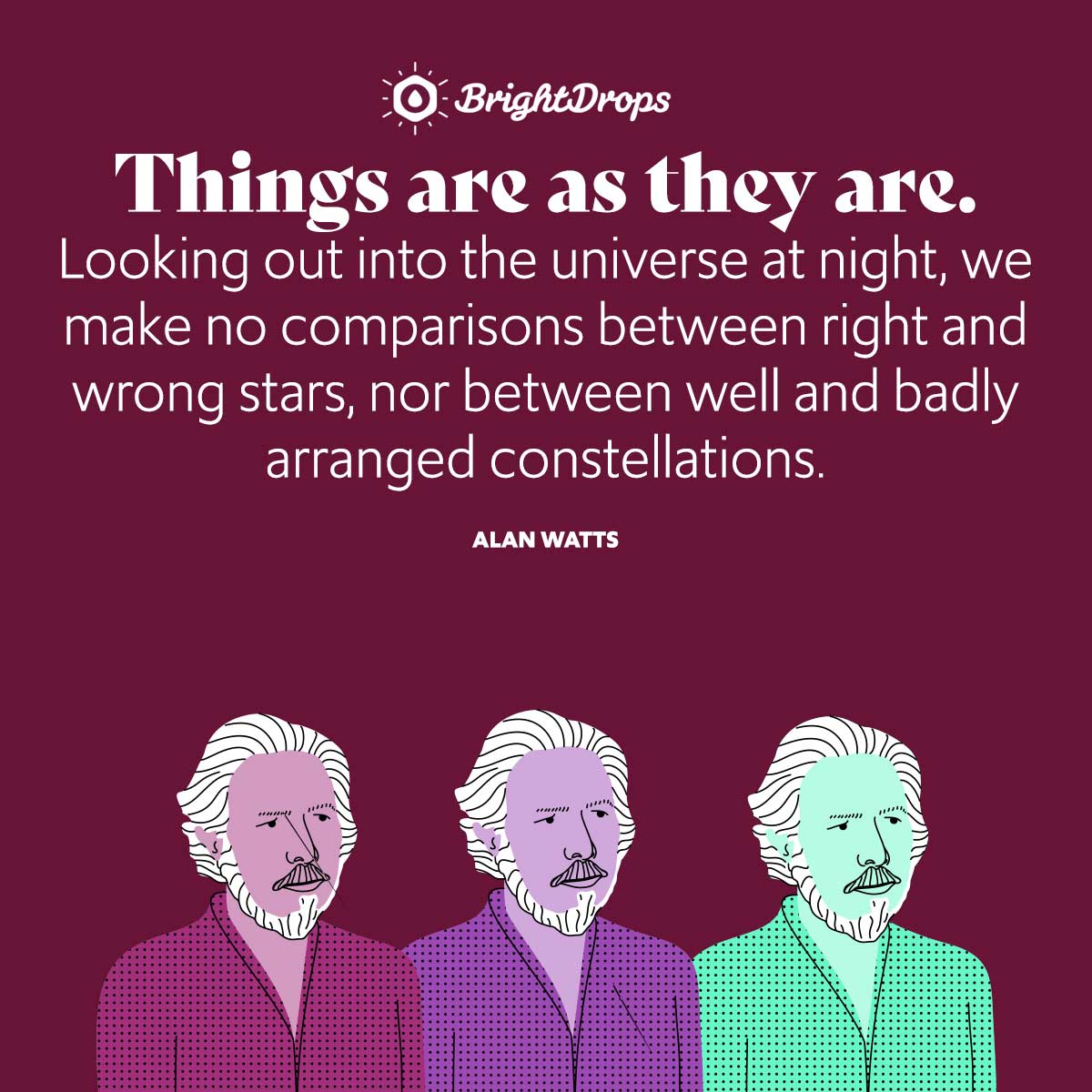 “Things are as they are. Looking out into the universe at night, we make no comparisons between right and wrong stars, nor between well and badly arranged constellations.” – Alan Watts

“You are an aperture through which the universe is looking at and exploring itself.” – Alan Watts

“We do not come into this world; we come out of it, as leaves from a tree. As the ocean waves, the universe peoples. Every individual is an expression of the whole realm of nature, a unique action of the total universe.” – Alan Watts

“We’re living in a fluid universe, in which the art of faith is not in taking one’s stand, but in learning to swim.” – Alan Watts

“If the universe is meaningless, so is the statement that it is so. If this world is a vicious trap, so is its accuser, and the pot is calling the kettle black.” – Alan Watts

“A world which increasingly consists of destinations without journeys between them, a world which values only getting somewhere as fast as possible, becomes a world without substance.” – Alan Watts

“You are the universe experiencing itself.” – Alan Watts 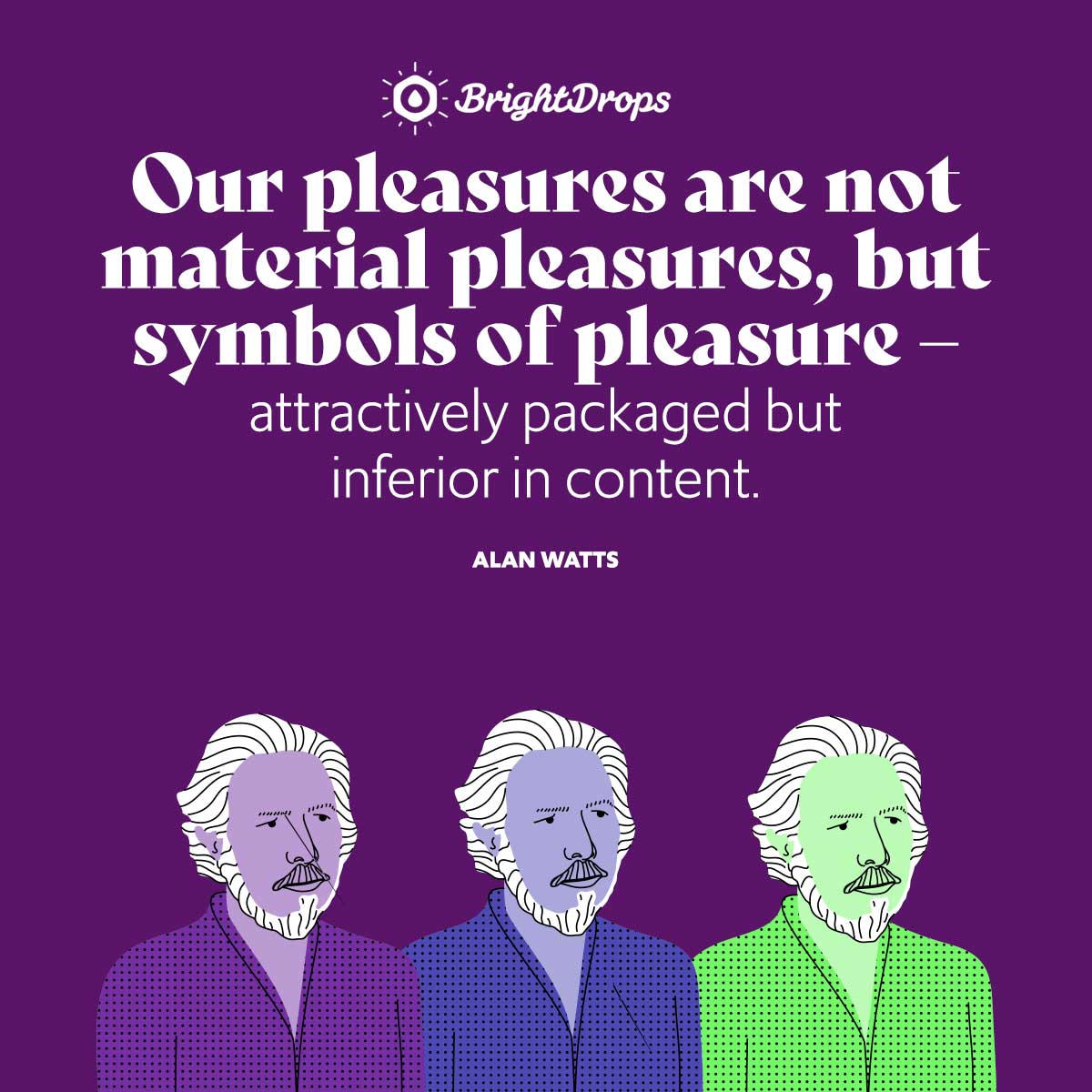 “Our pleasures are not material pleasures, but symbols of pleasure – attractively packaged but inferior in content.” – Alan Watts 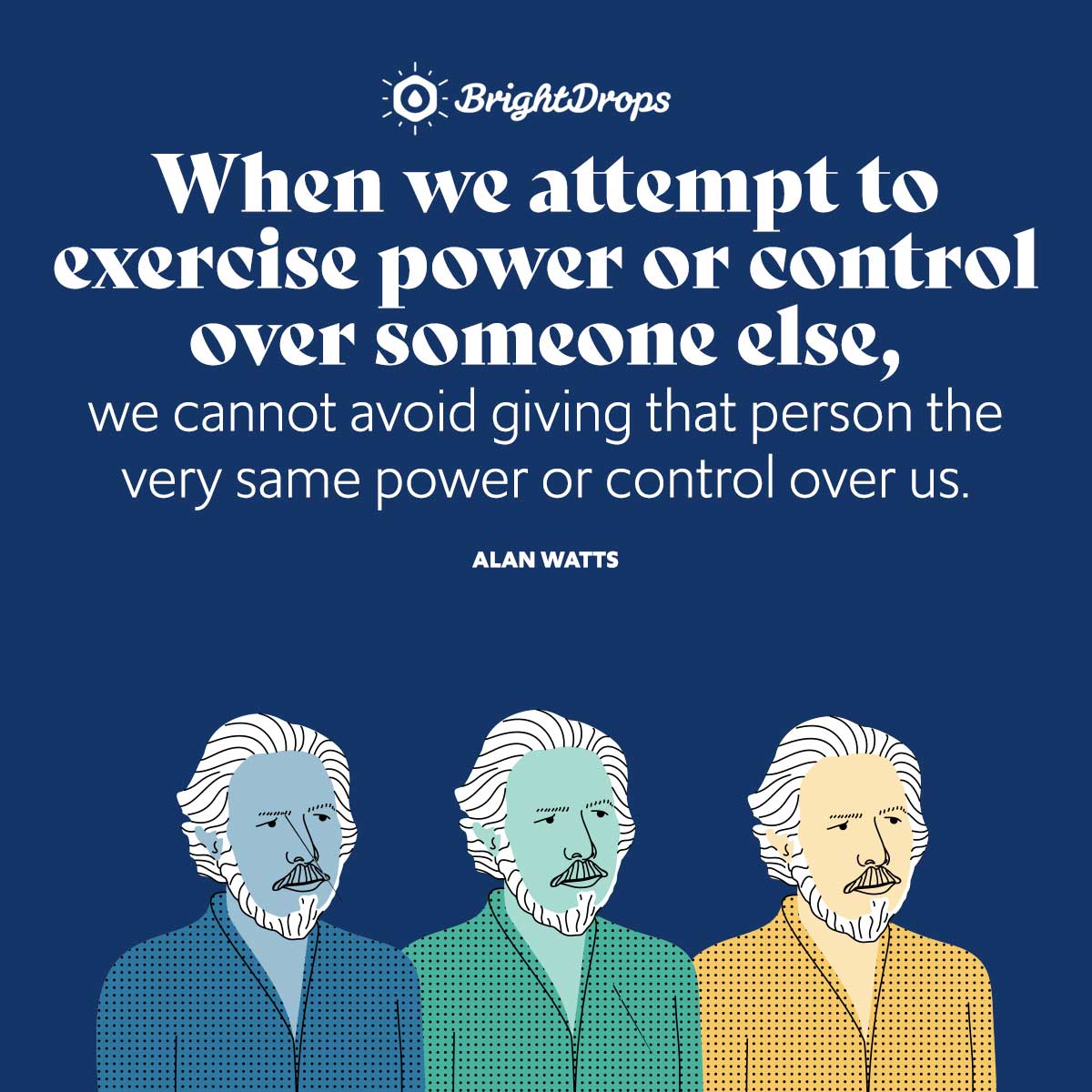 “For the trouble with our rich and powerful people is not so much that they are wicked, but that they do not enjoy themselves.” – Alan Watts 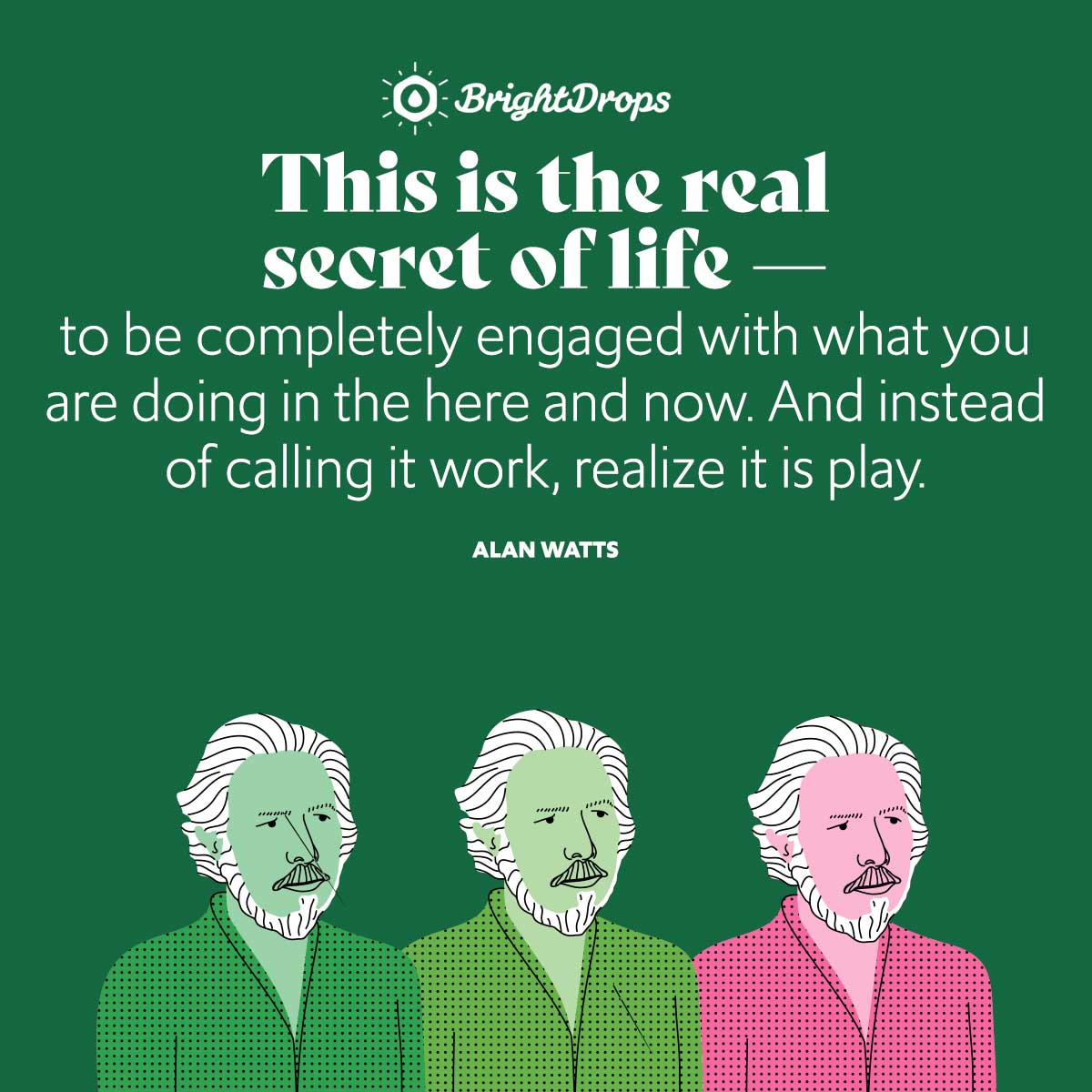 “This is the real secret of life — to be completely engaged with what you are doing in the here and now. And instead of calling it work, realize it is play.” – Alan Watts

“Hospitals should be arranged in such a way as to make being sick an interesting experience. One learns a great deal sometimes from being sick.” – Alan Watts

“It’s better to have a short life that is full of what you like doing, than a long life spent in a miserable way.” – Alan Watts

“The meaning of life is just to be alive. It is so plain and so obvious and so simple. And yet, everybody rushes around in a great panic as if it were necessary to achieve something beyond themselves.” – Alan Watts

“Much of the secret of life consists in knowing how to laugh, and also how to breathe.” – Alan Watts

“In the more intimate sphere of personal life, the problem is the pain of trying to avoid suffering and the fear of trying not to be afraid.” – Alan Watts

“Without birth and death, and without the perpetual transmutation of all the forms of life, the world would be static, rhythm-less, undancing, mummified.” – Alan Watts

“Life seems to be a system that eats itself to death, and in which victory equals defeat.” – Alan Watts

“The destination of life is this eternal moment.” – Alan Watts

Alan Watts Quotes on Self 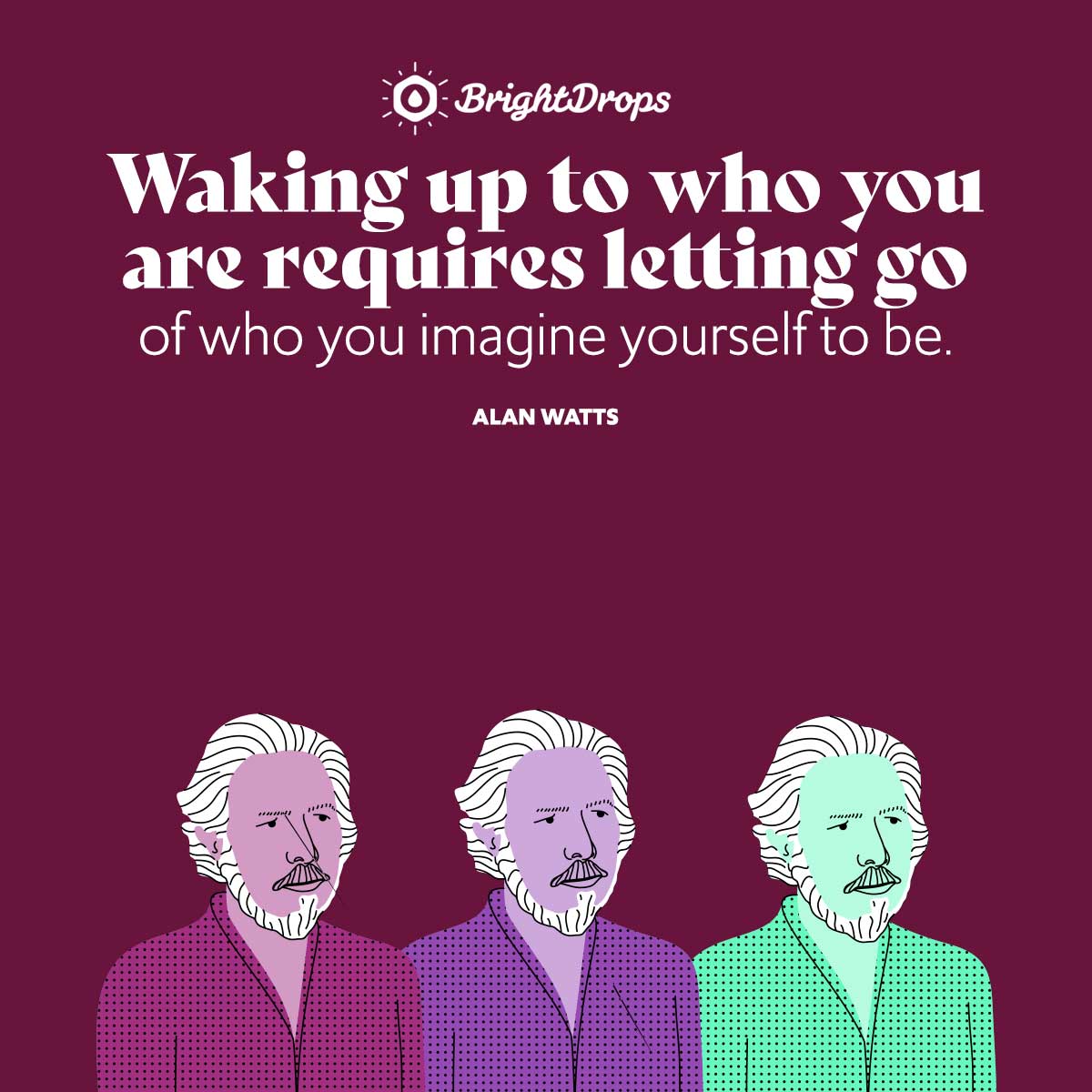 “Waking up to who you are requires letting go of who you imagine yourself to be.” – Alan Watts

“Trying to define yourself is like trying to bite your own teeth.” – Alan Watts

“What I am really saying is that you don’t need to do anything, because if you see yourself in the correct way, you are all as much extraordinary phenomenon of nature as trees, clouds, the patterns in running water, the flickering of fire, the arrangement of the stars, and the form of a galaxy. You are all just like that, and there is nothing wrong with you at all.” – Alan Watts 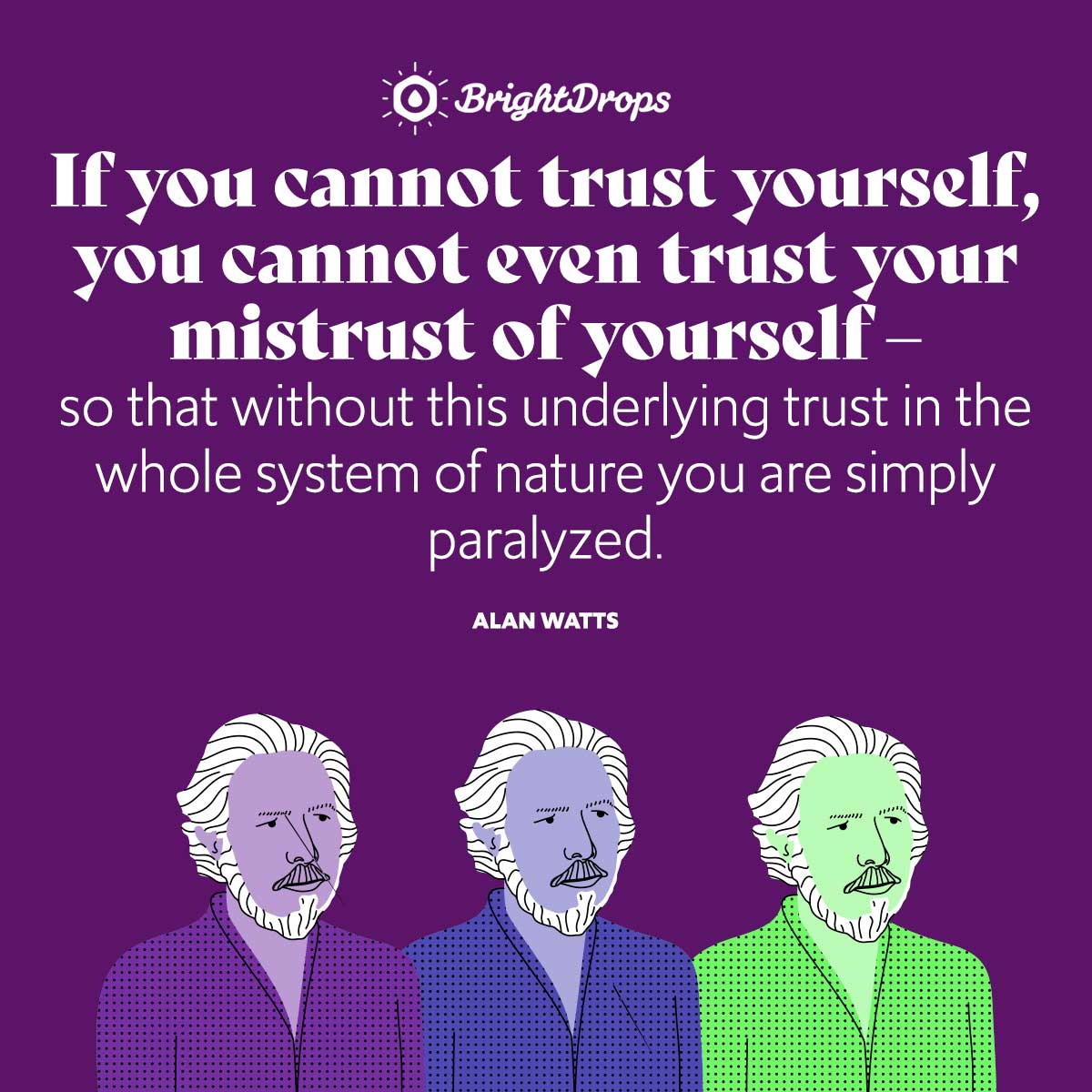 “If you cannot trust yourself, you cannot even trust your mistrust of yourself – so that without this underlying trust in the whole system of nature you are simply paralyzed.” – Alan Watts

“To have faith is to trust yourself to the water. When you swim you don’t grab hold of the water, because if you do you will sink and drown. Instead you relax, and float.” – Alan Watts

Alan Watts Quotes on Everything Else 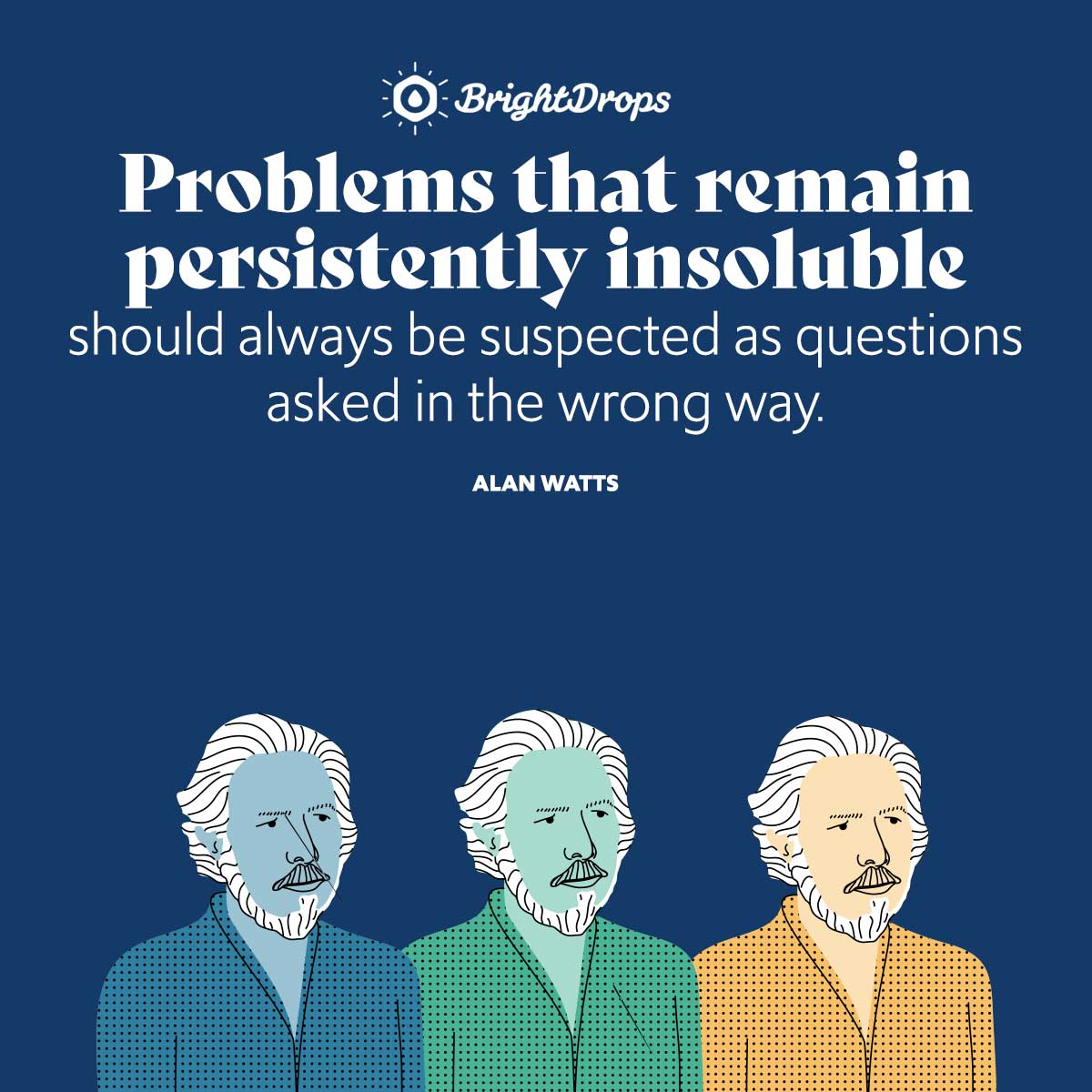 “Problems that remain persistently insoluble should always be suspected as questions asked in the wrong way.” – Alan Watts

“Technology is destructive only in the hands of people who do not realize that they are one and the same process as the universe.” – Alan Watts

“Society is our extended mind and body.” – Alan Watts